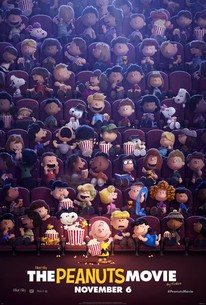 Critics Consensus: The Peanuts Movie offers a colorful gateway into the world of its classic characters and a sweetly nostalgic -- if relatively unambitious -- treat for the adults who grew up with them.

Critics Consensus: The Peanuts Movie offers a colorful gateway into the world of its classic characters and a sweetly nostalgic -- if relatively unambitious -- treat for the adults who grew up with them.

Critic Consensus: The Peanuts Movie offers a colorful gateway into the world of its classic characters and a sweetly nostalgic -- if relatively unambitious -- treat for the adults who grew up with them.

Charlie Brown, Snoopy, Lucy, Linus and the rest of the beloved "Peanuts" gang make their big-screen debut, like they've never been seen before, in state of the art 3D animation. Charlie Brown, the world's most beloved underdog, embarks upon an epic and heroic quest, while his best pal, the lovable beagle Snoopy, takes to the skies to pursue his arch-nemesis, the Red Baron. From the imagination of Charles M. Schulz and the creators of the ICE AGE films, THE PEANUTS MOVIE will prove that every underdog has his day. (C) Fox

News & Interviews for The Peanuts Movie

View All The Peanuts Movie News

Critic Reviews for The Peanuts Movie

To paraphrase a speech made once upon a time in a pumpkin patch, there's no hypocrisy to be found in any of this, just sincerity, pretty much as far as the eye can see.

Rendering the Red Baron-fighting Snoopy and way too many supporting characters in 3-D, and placing them in near-photo-realistic backgrounds, drains much of the charm from "The Peanuts Movie."

We're delighted to report that: you're a good movie, Charlie Brown.

If you are looking for an agreeable and entertaining school holidays film for younger children, this is it. Fans of the comic strip should get a kick out of it, too.

The Peanuts Movie is charming in parts and high in nostalgia value for generations that virtually befriended characters such as Snoopy, Linus (with his security blanket), Lucy and Pig Pen.

The Peanuts Movie is both modern and traditional, pleasing on all fronts, which must have been hard to achieve.

What makes Charlie so easy to root for - no matter how often he fails, he always picks himself up and tries again.

Charles Schulz would be proud of this tribute. [Full review in Spanish]

Best of all, the uniquely poignant, bittersweet reflection associated with Schulz's work is always to the fore.

I laughed at parts like the Kite eating tree and Snoopy singing or dressing as Joe Cool but I just don't think it's something that is going to be considered a classic.

The voice cast of The Peanuts Movie, found through over 1000 auditions, adds immeasurably to giving it a place amongst the best cartoon specials.

We can allow ourselves a little bit of that saccharine joy every now and then. For those moments, we have Charlie Brown and his gang...

Audience Reviews for The Peanuts Movie

The Peanuts Movie delivers Schulz's timeless comic in an innovative and modern way. Holding its weight with clever animation, charming story and benevolent humor, the film is a very solid presentation to a new generation of fans as well as its followers. 4/5

Remember Charlie Brown? Unfortunately the underlying theme in this is that very thought, and while it does well to nudge that memory nothing new is added, nothing fresh ... but the animation tech. And therein the rub. There's the feeling of holding back throughout, of not giving it all, of constraint, and that's the takeaway. The sound of one hand clapping.

Steve Martino revisits the characters of Charles M. Schulz in The Peanuts Movie. Running with a very very very friendly tone and a brief 85 minute run-time, the plot comes complete with many nostalgia moments and a delightful story. With that said, even with a shorter run-time than a lot of other films, this one still seems a bit stretched. The second story-line involving Snoopy feels as if it exists to extend the film out. The CG animation doesn't trump the old fashioned sketches; however, there is more than enough throwbacks and character movements to make this a successful picture visually. Backed with a classic soundtrack and much approved voice work, this film also delivers in the sound department. The Peanuts Movie excels on many levels and is easily a recommendable easy going animation.