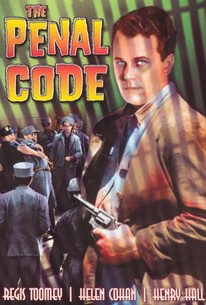 New York Police Commissioner Mulroney opens Penal Code with a stern warning for parents about keeping the children off the streets and out of gangs. The rest of the film provides a grim example of what could happen if they do not heed him as it tells the tale of a young man's descent into criminalhood and eventually jail. After serving his time, he tries to reform, but finds his bad-reputation clinging to him tartar to a tooth.

Critic Reviews for The Penal Code

There are no critic reviews yet for The Penal Code. Keep checking Rotten Tomatoes for updates!

There are no featured reviews for The Penal Code at this time.