The People vs. George Lucas2011 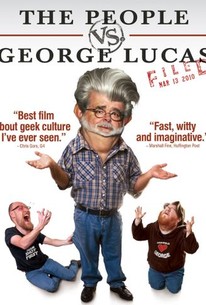 The People vs. George Lucas Photos

The passion the original Star Wars trilogy inspires in its fans is unparalleled; but when it comes to George Lucas himself-one of the most passionately debated filmmakers of all time-many have found their ardor has cooled into a complicated love-hate relationship. This hilarious, heartfelt documentary delves deep into Lucas's cultural legacy, asking all the tough questions. Has Lucas betrayed his masterwork? Should he have left the original trilogy alone? Will he ever redeem himself in their eyes, and more importantly, does he have any obligation to do so? Combining key testimonies from Gary Kurtz (producer of American Graffiti, Star Wars and The Empire Strikes Back), Dave Prowse (a.k.a. Darth Vader), Neil Gaiman (The Sandman, American Gods) and Francis Ford Coppola (The Godfather Trilogy, Apocalypse Now), and fan footage from around the globe that includes interviews, stop-motion animation, Super 8 action figure films and puppet rants, The People Vs. George Lucas takes a hard look at the man behind the most popular franchise in film history and asks: What the hell happened? (USA/UK, 2010) --(c)Landmark

Critic Reviews for The People vs. George Lucas

A devastating indictment of our modern geek culture of entitlement.

This look at Star Wars fanatics and their love-hate relationship with George Lucas turns out to be more interesting than most fanboy docs because director Alexandre O. Philippe touches on some fairly knotty matters of film history and creative ownership.

You don't have to be a "Star Wars" nut to enjoy this fast-paced film, though it's sure to resonate most with those whose childhoods - and beyond - were shaped by the 1977 phenomenon.

If you're a Force completist, this is as crucial as a bootleg of 1978's "Star Wars Holiday Special." Which, by the way, was awesome.

There's a lot of anger floating around in "The People vs.," but Mr. Philippe somehow manages to make the overall tone good-hearted, and he ends on a sentimental note of exasperated love for the man frequently referred to as "the creator."

A surprisingly level headed exploration into the revolt of a fanatical fan base towards their messiah that is funny, insightful and just a tad silly.

For disillusioned fans like myself, it's a unnecessary reminder of the things you hate about a thing you used to love.

An outstanding look at the enormously dysfunctional relationship between a creator and his adoring fans.

Really a testament to the hollow fruitless worship of the Star Wars Saga...

The visionary behind 'Star Wars' could learn a thing or two from the smart, and richly comic, documentary The People vs. George Lucas

A skillfully edited, wide-ranging look at a subject that's very close to many movie fans' hearts.

Audience Reviews for The People vs. George Lucas

This is THE documentary film any Star Wars fan would want to watch if they have ever pondered whether the big George Lucas has been correct in his tinkering. Its not just the constant fiddling that is questioned though, the much talked about prequels are also questioned along with the way the big GL has changed as his fame and fortune has grown since 1977. To put it bluntly this documentary is brilliant stuff and NOT just a GL bashing exercise for fanboys I must stress. This is a very well made argument against the big GL for his tinkering and decisions that are covered by fans from all other the world. Not only fans I might add but big name stars such as Simon Pegg and director Francis Ford Coppola along with others from the media and effects world, all add their views. Even the last [i]Indiana Jones[/i] fiasco gets a once over as fans despaired from the mighty fedora wearing hero's humiliation. From watching this film you do see (with much video evidence) that Lucas has indeed changed. A man who was once proud to fight the establishment has now become the establishment. A massive money making machine with yes men/women at his beck and call and no other input but his own. Its a shame to see but very evident that the story of how Anakin became corrupted by the dark side in the Star Wars franchise is in fact the story of Lucas. Lucas became a dark lord as did Anakin and some say that the success of Star Wars destroyed Lucas as a film maker. This documentary is extremely interesting it must be said. You do discover many gems of information such as a letter from the PR department of LucasFilm stating that the original negatives of the classic trilogy were permanently altered when the SE editions were made!! Also ironically we find that Lucas himself testified before US Congress against the colourization of black and white films back in 88, stating that it would be even easier in the future for old negatives to be replaced by new versions. It would be a great loss and that history must not be rewritten! Jesus the hypocrisy. The main controversy of this film is the SE editions and why Lucas continues to play with his films when there's nothing wrong with them in the first place. The arguments are strong and could go on forever but it has to be said that at the end of the day the films belong to history now. The reason why Lucas wants to change the films is obviously because he is a different man from way back in 77. Of course he wants to change it, any director could change their old films when they look back on them because people change and look at things differently in time and with age. But in general people don't do that (hopefully) because they are products of their time, a moment in history that should not be altered. It would be very easy to spruce up old out of date movies and make them all flashy with modern effects (CGI), but of course then it wouldn't be the same original movie. Gary Kutz (Star Wars producer) points out that the films work because of their limitations, the lack of money, the use of basic effects and lack of high-tech gadgetry. These are all reasons why the original movies were so great and innovative, especially for the era. People had to be inventive and use their skills, the same could be said for so many classic films across all genres but you wouldn't dare go back and crowbar in CGI bits or replace whole sections or peoples performances. I think GL forgets about all the folk that made his dreams a reality when he hacks away. He created the idea, the story, but he didn't create all the effects, models, sets, costumes, weapons etc...There were many many people who contributed a lot of skill and hard work to create Lucas' vision. This is the main crux of the documentary and its very very well presented with lots of footage from the movies along with homages...not needless bashing. The originals have been released on DVD of course back in 06 but they were very poor copies plopped onto DVD with no love or attention. We still await good cleaned up versions like Ridley Scott did for 'Blade Runner' or Spielberg with 'E.T.' or even Gilliam with 'Brazil'. Of course there are plenty of Star Wars fans that voice their opinions which some won't agree with, its an argument that both sides will never feel satisfied with but at the end of day everyone still just about respects and loves Lucas for his visual opus. They just wish he would leave it be.

Interesting and must see documentary for Star Wars fans that feel that George Lucas destroyed his masterwork by re editing his films and dumbing them down. This film looks at the cultural impact of Star Wars, the legacy it has created, the infamous prequels that don't hold a candle to the originals. I grew a diehard Star Wars fan, and I remember when Phantom Menace came out, I was 14 at the time. I thought it was a decent film, but it didn't have that spark that the originals had. Also with the tweaked special editions, I felt it ruined the original experience of watching the original Star Wars trilogy, and made me ask the question, why fix something when it

Theres a strong sense of romanticism that echoes in this documentary. It proves its point from many of interviews but goes to a point of overkill with this as well.

This is such a great documentary, since it perfectly covers and conveys the love hate relationships inherent in Star Wars fandom. This movie is specifically about fans of the first trilogy, and the ways in which George has changed the movies over the years. It's a perfect expression of the deep love and equally deep resentment that the fans have toward Lucas for A) creating something they love and B) relentlessly tampering with it and diminishing its resemblance to the original they loved. It's ironic that the more ownership Lucas takes over his creation, the more detached he becomes from what it was he created in the first place. What's really remarkable about this movie is that it doesn't take sides, really, because it gives equal voice to fans of all different opinions. Why is it that the prequel trilogy is so hated by fans of the originals - is it because they're bad, because they're different, or is it because the original fans have grown up? The fans included in the film fall all over the spectrum in their feelings: from blind anger to bitterness to reluctant admiration. Their love for the movies is undeniable, but their opinion of its creator is considerably more contested. I kind of wish that George Lucas had been interviewed for this film, since his voice is the one missing from this dialogue. He's present in archived interview footage, though. This documentary is insightful, affectionate and really rather balanced.

The People vs. George Lucas Quotes