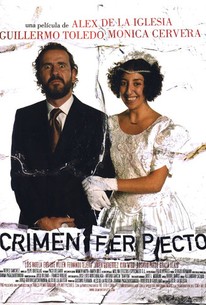 Critics Consensus: If you like your comedies wicked and pitch-black, El Crimen Perfecto delivers without flinching.

Critics Consensus: If you like your comedies wicked and pitch-black, El Crimen Perfecto delivers without flinching.

Critic Consensus: If you like your comedies wicked and pitch-black, El Crimen Perfecto delivers without flinching.

A playboy has the tables turned on him when he finds himself being used as a plaything by an undesirable woman in this black comedy from Spain. Rafael (Guillermo Toledo) is a self-styled ladies' man working at an upscale department store in Madrid. Rafael thinks of himself as suave and sophisticated, and he has two goals -- to run the store's apparel department, and to seduce every woman he works with. Well, every woman except for one -- Lourdes (Monica Cervera), a homely sales clerk who obviously has a crush on Rafael, but is too nervous to talk to him. Rafael's primary rival for control of the clothing department is Don Antonio (Luis Varela), and Rafael becomes filled with rage when he learns that Don Antonio has been given the job he's worked so hard to attain. Rafael gets into an argument with Don Antonio after hearing the news, and in the midst of the quarrel Don Antonio drops dead. Rafael discovers to his horror that there was a witness to Don Antonio's sudden demise -- Lourdes, who is no longer acting quite so meek. Realizing she has Rafael in a tight spot, Lourdes informs him that in exchange for her silence and help disposing of the body, he must become her lover, and it isn't long before Rafael begins to buckle under the strain of serving as her sexual slave. El Crimen Perfecto (aka The Perfect Crime) was originally released under the punning title El Crimen Ferpecto (aka The Ferpect Crime).

A story that begins as farce but that evolves into something approaching satirical profundity.

This Spanish-language romp is a delightful send-up of retail culture, movie thrillers and the eternal 'ladies' man' facing his just deserts.

My advice is to choose the first half, where things are really funny until they aren't.

An outrageous comedy of errors set at a Madrid department store.

A worthwhile and fairly amusing effort.

An astute satire on the boundlessness of unchecked sexual fetishism and power.

An outburst of filmic inventiveness and a nicely convoluted plot with elements of outright fantasy, nearly all of which works.

Scattered clever moments do not a good dark comedy make.

Long on outrageous style but short on real laughs.

Toledo is hilarious as Rafael.

Shrug off the shaky philosophy and instead savor the film's snarkier elements.

[J]ust cuz a movie has subtitles doesn't make it deep or meaningful or even worth your time...

Alex De la Iglesia is an expert connoisseur of the bizarrerie he likes to have in his films, and here it works perfectly. the ludicrous ending is the only big problem of this ultra hilarious noir comedy.

[font=Century Gothic]"The Perfect Crime" starts with Rafael(Guillermo Toledo) living his ideal life as the head of the ladies wear department, having nightly affairs with members of his nubile staff. He is in a competition with Antonio(Luis Varela), of mens wear, to be the new floor manager but loses out on the final day. Not only that, but Antonio intends to fire his rival for openly berating a customer. But before that can happen, Rafael and Antonio scuffle and Rafael accidentally kills Antonio. Now, Rafael has two new problems: a possible eyewitness and what to do with the body?[/font] [font=Century Gothic][/font] [font=Century Gothic]"The Perfect Crime" is a very entertaining black satire that wittily comments on the materialistic, shallow culture that we live in without turning into a lecture. The events are seen through Rafael's eyes and narration.(The movie getting more surreal as it goes along might be a sign of Rafael starting to lose his mind.) He does not see much in Lourdes(Monica Cervera), but only because she is plain looking, unlike most of the women who work for him. However, she does have a few surprises in store... [/font] [font=Century Gothic][/font] [font=Century Gothic]And please tell me that is not an actual reality show...[/font]

Hilariously wacky black comedy about a department store salesman whose comfortable life is turned upside down after he is passed over for a promotion. A modern, hip sensibility is beautifully integrated with deeply serious events, in this thoroughly winning Spanish farce. Indeed his life spins so wildly out of control, the results are delightfully ridiculous. Actress Mónica Cervera is particularly effective as Lourdes, a co-worker he would rather have nothing to do with.

(The Ferpect Crime : ) I kid you not, flixster buddies, this is the most spontaneous laughing I've done since Shaun of the Dead. It's been a good little while. And before that, it was Napoleon Dynamite. I can't remember the time before that : ) Of course if you didn't laugh at Shaun of the Dead or Napoleon Dynamite, then I guess this won't mean much to you. Brilliant acting, brilliant script, brilliant directiing.

Toledo is just topped by Cervera, who's just a bit outdone by Villén, who takes a small step behind whoever the little girl is who plays Cervera's sister. And the mom and dad are hilarious, too.

Hitchcock fans might love this; there are multiple tributes to his films.

If you are into dark comedy, don't miss this.

I miss Gene Siskel. I have a hunch he might have loved this movie.