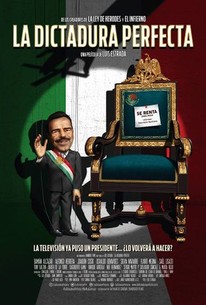 Mexico's President commits a serious gaffe on live television while welcoming the U.S. ambassador. His allies at the media conglomerate Television Mexicana seek to divert attention by reporting on a bribery scandal involving Governor Carmelo Vargas, who is seen caressing a briefcase full of dollars. Governor Vargas then pays millions to TV MX to improve his image and make him a suitable candidate for the presidency. TV MX lands on the kidnapping of twin girls for this purpose, and shows Vargas as a dynamic leader heading the search efforts. The film is a sardonic, (black) humorous, at times violent look at the convergence of presidential politics and a voracious media monopoly. The viewer is left to decide how much of it is fiction, and how much a true reflection of life at the top in Mexico.

Critic Reviews for The Perfect Dictatorship

La Dictadura Perfecta is another showcase of Estrada's intelligence and sarcastic style that has made him an accurate and uncomfortable chronicler. [Full review in Spanish]

There are no featured reviews for The Perfect Dictatorship at this time.