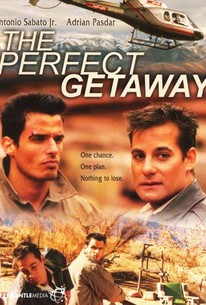 Helicopter pilot Colt Erikson (Adrian Pasdar) is taking a chartered flight over desert country when his chopper is hijacked by the friends of convicted murderer Randy Savino (Antonio Sabato Jr.). Led by the beautiful but deadly Alex (Alicia Coppola), these worthies intend to spring Randy from prison, make good their escape from the country, and then dispose of awkward witness Colt. The plot thickens when the pilot's girlfriend Julia (Kelly Rutherford) becomes a "player" in the proceedings, in which no one is quite certain who is holding all the cards at any given time. "Inspired by actual events" (or so claimed the ABC publicity people), and boasting some truly impressive aerial stunt work, the made-for-TV The Perfect Getaway first aired February 12, 1998.

Barbara A. Smith
as Female Newscaster

News & Interviews for The Perfect Getaway

View All The Perfect Getaway News

Critic Reviews for The Perfect Getaway

I love this movie enough to pay to go see it again and see what I missed along the way.

There are no featured reviews for The Perfect Getaway at this time.