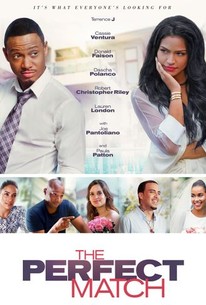 Charlie is a playboy who's convinced that relationships are dead even though his sister, a therapist, tries to tell him otherwise. His best friends bet him that if he sticks to one woman for one month, he's bound to fall in love. Charlie takes the bet because he believes that he's immune to love...that is until he crosses paths with the beautiful and mysterious Eva. Turning on his irresistible charm, Charlie coaxes Eva into a casual affair but soon finds out that Eva has turned the tables on him. Now Charlie is questioning whether he may actually want more than just a one night stand.

News & Interviews for The Perfect Match

View All The Perfect Match News

Critic Reviews for The Perfect Match

The Perfect Match looks and sounds increasingly like a romantic comedy created out of secondhand memories, vaguely described or poorly translated.

While its title suggests a narrower focus, "The Perfect Match" is largely an ensemble rom-com, and a pretty enjoyable one.

As if to make up for the predictable main plot, The Perfect Match is bogged down with a slew of uninteresting B-stories.

There is a welcome (and surprising) layer of complexity running through the film that makes it a little bit more than your standard fare. The likable and funny ensemble helps too.

"The Perfect Match" is a romantic comedy by default, and mostly everyone involved is asleep at the wheel.

Woodruff, a music-video specialist with a filmography full of retreads ... has mostly made another one here.

It's more like cold garbage; it's harder to swallow.

The Perfect Match would have been better off as a straight-to-DVD release.

The script is trite and stilted.

Faltering, fumbling rom-com that turns out to be forgettable fluff...

Pleasant enough, if not paper-thin and featherweight, The Perfect Match is a bland picture starring attractive people that never quite seems to connect the dots.

Audience Reviews for The Perfect Match

There are no featured audience reviews yet. Click the link below to see what others say about The Perfect Match!