The Perils of Pauline1947 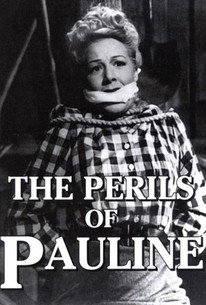 The Perils of Pauline Photos

The third of four films bearing the title of The Perils of Pauline, this musical biopic purports to tell the life story of famed silent serial queen Pearl White. Right at the beginning, however, an introductory title informs the audience that what follows is merely "suggested" by incidents in White's life and career. Translation: The film is a fabrication from beginning to end, but an enjoyable one. Played on all four cylinders by Betty Hutton, White is introduced as a frustrated factory worker who aspires to become a dramatic actress. She joins a touring theatrical troupe managed by handsome but pompous Mike (John Lund), but fame and fortune elude her because she's unable to suppress her natural rambunctiousness. In desperation, White takes a job at a movie studio, where she promptly finds herself in the middle of a slapstick pie fight. With the help of bombastic director Mac (William Demarest), top-hatted villain portrayer Timmy (Billy De Wolfe), and imperious dramatics coach Julia (Constance Collier), Pearl soon becomes world-famous as the star of such cliffhanging, tied-to-the-railroad-tracks serials as The Perils of Pauline (hence the title of this film). At the height of her fame, she arranges for her theatrical mentor Mike to get a job as her leading man, forcing him to swallow his pride and admit that he's been in love with her from the moment he met her. A series of clichéd complications contrive to separate White and Mike, but he returns to her arms when she's seriously injured during a Parisian stage performance. A few fairly credible recreations of silent moviemaking techniques aside, The Perils of Pauline is wildly anachronistic and inaccurate (for one thing, Pearl White made most of her serials in New Jersey rather than Hollywood). As a musical comedy, however, the film passes muster, especially during the performance of such Frank Loesser tunes as "I Wish I Didn't Love You So" and "The Sewing Machine." As a bonus, the film rounds up several silent-movie veterans in cameo roles, including William Farnum, Chester Conklin, Jimmy Finlayson, Creighton Hale, Hank Mann -- and Paul Panzer, who played the sneering villain in the original 1914 Perils of Pauline.

'Snub' Pollard
as Propman in Saloon

Critic Reviews for The Perils of Pauline

It should have a nostalgic appeal for some audiences, an instructive one for others and a hilariously comic one for all.

The picture is a triller as well as a thriller, with a bang-up score written by Frank "Praise The Lord and Pass the Ammunition" Loesser.

Audience Reviews for The Perils of Pauline

Not really a bio of Pearl White, but a perfect vehicle for Betty's unique talents. She's bursting with energy as usual but not quite to the obnoxious degree she could sometimes attain.

The Perils of Pauline Quotes