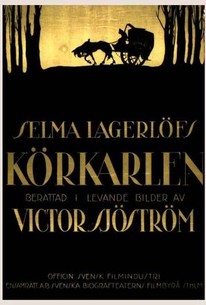 David Holm (Victor Sjostrom) is the abusive husband who finds his wife (Hilda Borgstrom) has left him after he is released from prison. He vows vengeance for her abandonment in his hour of need. The couple is reunited in a Salvation Army mission where David convinces his estranged wife to reconcile their differences. Edith Larssen (Astrid Holm) aids in bringing the troubled couple together. A year later, David has regressed to his alcoholic ways and sees the messenger of death in a harrowing dream. He rushes to save his wife from suicide as she contemplate the murder of the couple's children in this implausible melodrama.

Critic Reviews for The Phantom Carriage

What makes it so creepy and chilling and strange is definitely... the editing.

Filled with images both chilling and entrancing, Sjöström's masterwork is an unforgettable work of art.

Whatever the suggestiveness of the fable, the film works on us with the bare palpability of its elements-even of its visual tricks.

Despite all the creepiness on display, the film ultimately affirms not the emptiness of death, but rather the importance of life.

One of the key films in the development of expressionist cinema.

The Phantom Carriage is not so much a whole film as it is a filmed collection of ideas, but the manner and enthusiasm to which they are realized is arresting, and hypnotic.

The Phantom Carriage was quite spiritually and emotionally advanced for its day, comparable to Chaplin's The Kid, from the same year, and to D.W. Griffith.

Using superimposition and double-exposure to bring the rickety wagon and its wretched occupants to ghostly life, The Phantom Carriage balances visual poetry with emotional violence.

Slower than death itself, but just as spine chilling, this metaphysical morality play feels less like an artefact from a different era than a wintry warning from another world.

The double-exposure photography used throughout is a stupefying achievement of its own, an incantation of overlapping worlds and a visualization of the characters' growing awareness of the connection between body and soul.

Audience Reviews for The Phantom Carriage

A journey to redemption that is poetic and eerie in equal measures. A silent masterpiece.

beautiful and spooky, it's like a swedish variation on dickens' 'christmas carol' with a quite sophisticated flashback structure and up to four layers super imposition effects. director victor sjostrom also stars. best of all, it's in public domain and can be found on youtube and internet archive

Not really the journey of gothic horror that one expects, "The Phantom Carriage" is more like a bittersweet cousin to "A Christmas Carol" and "It's a Wonderful Life." Victor Sjostrom directs and stars in this 1921 silent, decades before his famed role in Ingmar Bergman's "Wild Strawberries." Sjostrom is David Holm, a down-and-out wastrel who has lost his family and carries tuberculosis. One New Year's Eve in a lonely graveyard, he tells a couple of seedy friends about the supernatural "cart of death" that eternally rolls around the world collecting souls. The cart is not driven by Death himself. Instead, it has a new, unlucky rider every year: the last person to die on New Year's Eve, the night before. And wouldn't you know? David dies himself, just before the clock strikes midnight. Of course the cart and its sickly horse arrive, ironically manned by the deceased friend who first lured David away from righteousness (a needless bit of confusion: the two look so much alike that I initially wondered if the driver was an aged David -- in fact, three characters look annoyingly similar as the story jumps around in time). David's spirit barters with his shadowy friend, but Death's rule of succession is firm. Meanwhile, a good-hearted Salvation Army nurse is on her deathbed, mysteriously asking for David. We don't understand why at first, and the script is quite modern in how it presents quizzical situations that aren't explained until later. Christopher Nolan probably loves this film. Most of the story is relayed through flashbacks. Sometimes, flashbacks within flashbacks. We learn that David alienated his wife and children through excessive drinking, and that they moved away while he was drying out in prison. And that he angrily sought his wife after being released, just to wreak revenge. But there is hope. Perhaps his ghostly companion can push him to drop his bitterness, much like other spirits revitalized poor Scrooge. "The Phantom Carriage" makes abundant use of double images, which is not a gimmick but the perfect way -- considering 1920's technology -- to depict ghosts walking among the living. An underwater scene is especially spooky. The cinematography has that archaic split between blue-tinted night scenes and brown-tinted interiors but, on the other hand, the acting is considerably more natural than the era's usual exaggerated mugging and gestures. The worst part of my own viewing experience was not Sjostrom's fault. I'm talking about the score. It was just one long, evolving drone, recorded by the contemporary duo KTL. The textures were interesting at first, but turned more and more emotionally deadening as the film progressed and changed moods. The growling soundscapes were powerful during scenes of desolation, but sadly inappropriate during more sentimental moments. Occasionally, the shapeless din faded into what sounded like someone banging nails into a metal bucket. But this was not enough. Please hire another composer for the next edition?

Based on Thy Soul Shall Bear Witness! by Selma Lagerlof, The Phantom Carriage is one of the masterworks of Swedish Cinema. Directed by actor and director Victor Sjostrom, the film inspired Ingar Bergman to make movies, if that tells you anything. The groundbreaking special effects, the Charles Dickens type story and the performances are absolutely amazing. It also influenced people like Stanley Kubrick, most notably in The Shining. I actually hadn't heard of this before but I bought the Criterion Blu-ray release and fell in love with it. For those who have the patience for silent films, this is an amazing film.