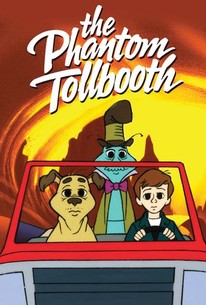 Chuck Jones made his feature-length debut with this animated tale about Milo, a young boy who travels to a strange world where numbers are at war with letters.

Mel Blanc
as Off. Short Shrift / The Word Speller / The Dodecahedron /

Daws Butler
as Whether Man

Larry Thor
as Kakofonous A. Dischord

Critic Reviews for The Phantom Tollbooth

The youthful viewer and his parents should overlook Phantom Tollbooth's flaws and concentrate on the film's underlying moral.

It's not one that I'll probably ever watch again... [but] It was a fun one to finally explore.

More would have been acheived without the inclusion of the sappy pop songs, but the film still has infinitely more savvy than most of the Disney cartoons of the period.

[The film] has some wonderful ideas, but they're likely to be a bit above the heads of very young children. The rest should enjoy it, especially the bits with the great Mel Blanc, Toonville's greatest-ever voice.

This fine adaptation of the children's book by Norton Juster was Chuck Jones's and MGM's first animated feature.

The animation is clean, with enough pop to do Dictionopolis-and-company justice.

Audience Reviews for The Phantom Tollbooth

Great Chuck Jones animation. His style is unmistakable; with each character's wide-eyes. The colors are rich and the backgrounds are beautiful. The princesses could've been detailed a bit better however. The story is a bit abstract and fanciful. The live action scenes with Butch Patrick in 1970's San Francisco are neato. The songs are catchy. An underrated fantasy cartoon which needs a proper DVD release.

A fun and seriously underrrated kids classic you've never heard of. Chuck Jones' animation is great and the story is in that category of late 60s out there. Unfortunately it would probably be lost on today's generation of kids but as much as I can't stand remakes, I'd love to see this story get a modern treatment. I also loved the dog and the Sergio Mendez-like soundtrack. The Phantom Tollbooth is dated as hell but if nothing else the adults might get a kick out of it.

This was an enjoyable movie largely because the source material was so good. Instead of focusing on trash like Hancock 2 and Star Trek and Watchmen, why not remake this underrated jewel? Granted, this is not a bad movie, but save a few cute scenes nothing new is really brought to the table. Nothing was really visually SPLENDID. I could REALLY see some sparks flying under Spike Jonze or Tim Burton.