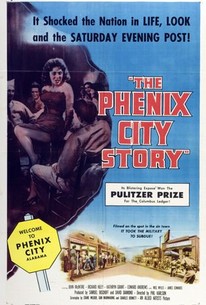 Based on a true story and featuring some of the actually people involved, this grim, violent crime drama is set in the title Alabama city that was in 1954 a modern-day Sodom and Gomorrah of organized crime, corruption and seamy behavior. The townsfolk, fed up they the tawdriness around them, elect a new attorney general, a man who vows to eradicate the gangsters and their filth. Unfortunately, the mobsters quickly murder the troublesome crusader. Fortunately, the attorney's straight-arrow son has just returned from the war and is only too happy to fill his late fathter's shoes. Despite the constant and potentially deadly obstacles presented by the mob, the iron-willed young man stands firm and eventually defeats them. Original versions of Phenix City Story feature a 13-minute preface that featured interviews with the people involved, including the widow of the murdered attorney general. In real life, John Patterson was later elected governor of Alabama, defeating, among others, future presidential candidate George Wallace.

Ma Beachie
as Herself

James Ed Seymour
as Himself

Clete Roberts
as Interviewer in Prolog
View All

Its borderline-obscene wallop is derived from its brusque brutality.

A violent, absorbing true story about an Alabama town's efforts to throw off the shackles of organized crime. Recommended.

... one of the most hard-hitting crime films of its era... inspired by real-life events and directed in a semi-documentary style with a tabloid punch.

Brilliant social commentary film - an extraordinary view of society in 1955.

Richard Kiley does a fine job as the crusading reformer.

Hmmm. I don't know about this one. The Phenix City Story in itself was pretty decent. Said to have been based on a true story of citizens fighting against a tradition of vice and corruption, The Phenix City Story tells its story effectively and at some points gruesomely (you see kids getting killed in this movie--almost comically but still.) More of a crime documentary than the obscure film noir classic its made out to be, this isn't a bad movie. Some scenes are very well done even if elements of the story aren't fleshed out so well. The biggest problem I had with The Phenix City story was the opening 15 minutes of man-on-the-street interview footage with the actual people who lived through the story. I understand the desire to make the movie more authentic or real, but the hokey and heavy-handed interviews were a bit much. Overall, not bad...

If you watch even a little bit of "The Phenix City Story", you'll know it was based on real events, the circumstances surrounding which are actually quite riveting. It's unfortunate then that the film regarding these events is so clumsy. After a short "newsreel" (where a reporter interviews some of the actual participants of the story), the film opens with a young man trying to get his girlfriend to quit her job as a dealer in one of Phenix City's several gambling dens. That Phenix City is in Alabama and both these actors speak with clear and obvious yankee accents is distracting, to say the least. Not only do several of the actors not even attempt an accent, some don't even attempt to act. The first half of the film is strictly B-movie grade MST3K type stuff. Phenix City, Alabama was once the sin capital (also known as the "wickedest city in the United States") of the United States, long before Las Vegas was even dreamt of. For 100 years, the "machine" ruled the city, raking in untold cash which, at the time the events of the film took place (early 1950s), added up to millions of dollars a year. Citizen groups occasionally rose up to challenge the mob, but they were usually squashed all too quickly by strong arm tactics and voter fraud. Yes, Phenix City, from the city hall and police force on down, was totally corrupt and on the take. That is, until John Patterson returned from serving overseas in Germany during the war. John saw his friends beaten and murdered joined in the fight against the mob. When his father, Albert Patterson, a great and famous attorney saw what his son was involved in, and became convinced he could no longer sit idly by. The father ran for attorney general of Alabama, on a platform that he would clean up Phenix City for good. It's quite a harrowing tale, and with a substantial amount of shockingly hard-nosed 1950s violence. Cheap sets and bad acting aside, the film is really quite something, although I think the newsreel portion of the film would've worked better as an epilogue rather than a prologue.