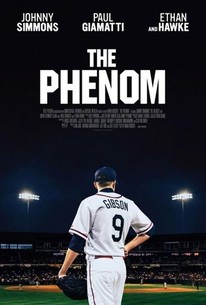 Critics Consensus: Powerfully acted and emotionally affecting, The Phenom proves a baseball movie can step away from the mound and still deliver a heater down the middle.

Critics Consensus: Powerfully acted and emotionally affecting, The Phenom proves a baseball movie can step away from the mound and still deliver a heater down the middle.

Critic Consensus: Powerfully acted and emotionally affecting, The Phenom proves a baseball movie can step away from the mound and still deliver a heater down the middle.

When major-league rookie pitcher Hopper Gibson (Johnny Simmons) can't find the plate, he's sent down to the minor leagues and begins sessions with an unorthodox sports psychologist (Paul Giamatti). In the process, hidden conflicts with his overbearing father (Ethan Hawke) are brought to light.

Valerie Martin
as Teresa May

News & Interviews for The Phenom

On DVD This Week: The Jungle Book, Me Before You, and More
Independence Day: Resurgence Is More of the Same

View All The Phenom News

Critic Reviews for The Phenom

When Buschel narrows his focus and has a handle on these characters' essences, there are flashes of greatness. All he needs is a tighter grip.

This "love me daddy" baseball pic that earns points for spending less than 5 percent of its time on the diamond and refusing to end in open competition...so far as the playing field is concerned.

It's Hawke who gives the film its dramatic urgency.

Not everything here works... But it's an interesting, great-looking film, and Simmons is just dynamite in it.

A welcome surprise for sports cinema, "The Phenom" handles itself like Robert Redford's "Ordinary People" when exploring the psychology of a Lebron James or Johnny Manziel-like sports sensation.

Instead of big fireworks, "The Phenom" offers low-key character moments. It's a small film with a lot of insight.

Ethan Hawke is making a habit of playing flawed fathers, but his feckless dads in Boyhood and Ten Thousand Saints appear positively benign in comparison with the toxic parent he plays in [this] psychological sporting drama.

Buschel is clearly on the right track to fully embracing the limitations of conventional structures in storytelling. When he does, it could lead to a minor masterpiece, which at times The Phenom flirts with.

There is a stronger, deeper, fuller motion picture to be made from this material. Earnest though it is, this one is decidedly far from phenomenal.

The mental side of baseball might be critical to winning, but it's not all that exciting to watch.

A thoughtful, introspective sports drama that suggests Noah Buschel, like Hopper, may have greatness in him.

As sports-centric films go, those folks looking for cheering crowds on a mild summer's night won't find much joy in The Phenom's mudville. It's a slow walk around the bases.

Audience Reviews for The Phenom

Hopper Gibson (Johnny Simmons) is in a position that every little boy dreams about. He is a star rookie pitcher in Major League Baseball. His numbers and talent are off the chart, when all of a sudden, he can't find the strike zone. There is nothing wrong with him physically, so the team sends him down to the minors and puts him to work with the top sports psychologist in the country. I really don't understand professional critics and what they look for when they rate a film. Take The Phenom for example, this film has got to be the slowest and most boring sports film I've ever seen, yet it has an 80 on Rotten Tomatoes. There was very little sports action in this film and the fast majority of it consisted of this guy sitting in a room talking to a shrink! Yes, the shrink was played by Paul Giamatti, who is an unbelievably talented actor, but why the hell would anyone want to watch some dudes therapy session? When he wasn't in therapy, he should be on the field, but no, he's dealing with his over barring father, who is fresh out of prison. Who plays this bad ass, bullying his pro-athlete son, who is in peak physical condition? A very old looking, very tattooed, Ethan Hawke and I really wasn't buying that for a second. There were some talented actors in this film, no doubt, but The Phenom was 88 minutes of talking and nothing more, what in the hell is so great about that? This film was as boring as movies get, so unless you're a die hard Paul Giamatti fan, I would absolutely let this one pass you by.