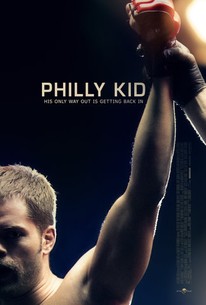 On the same night that he was crowned an NCAA wrestling champion, Dillon McCabe (Wes Chatham) was involved in the killing of a cop and then sentenced to fifteen years of prison. Ten years later, Dillon is paroled back onto the streets of his run-down Baton Rouge neighborhood. Before he can pick up the pieces of his life, his best friend gets in trouble with a vicious loan shark. To get the money to free him, Dillon must return to fighting - this time, mixed martial arts. But his quick, brutal success gets him into more trouble than ever. And after three vicious triumphs, he discovers that his real opponent is a corrupt system that requires him to do the impossible: lose. -- (C) After Dark

Critic Reviews for The Philly Kid

Audience Reviews for The Philly Kid

There are no featured audience reviews yet. Click the link below to see what others say about The Philly Kid!