The Piano Tuner of Earthquakes2006

The Piano Tuner of Earthquakes (2006) 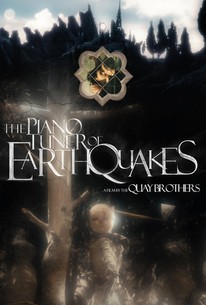 The Piano Tuner of Earthquakes Photos

The Brothers Quay return for their first film in a decade with this live-action story of an 19th-century opera singer who is murdered on-stage shortly before her upcoming wedding. Soon after being slain by the nefarious Dr. Emmanuel Droz (Gottfried John) during a live performance, Malvina van Stille (Amira Casar) is spirited away to the inventor's remote villa to be reanimated and forced to play the lead in a grim production staged to recreate her abduction. As the time for the performance draws near, piano tuner of earthquakes Felisberto (Cesar Sarachu) sets out to activate the seven essential automatons who dot the dreaded doctor's landscape and make sure all the essential elements are in place. Once again instilled with life after her brief stay in the afterworld, amnesiac Malvina is soon drawn to the mysterious Felisberto as a result of his uncanny resemblance to her one-time fiancé Adolfo (also Sarachu). ~ Jason Buchanan, Rovi

News & Interviews for The Piano Tuner of Earthquakes

View All The Piano Tuner of Earthquakes News

Critic Reviews for The Piano Tuner of Earthquakes

Shot in HD and wholly embracing the technology, Piano Tuner makes bold leaps into visual domains previously untrodden by filmmakers, even the Quays, but incorporates plenty of their animation and their trademark density of decor. Absolutely entrancing!!!

What the movie lacks in acting and coherence, it more than makes up for through imagery.

It is a bold step into a mainstream realm for its ancient fablelike theme, agile storytelling, magnificent design and sure grasp of long-form narrative structure.

This opaque tale offers meticulously crafted atmosphere, but rather less passion or drama.

As in most of the Quays' fantasias, the narrative is oblique and slow moving but the florid visuals are rife with sexual and psychological overtones.

Like a dream, this film is wispy and ethereal; like a nightmare, it lodges in your hindbrain and gnaws away with gleeful abandon.

The narrative fails to be as colorful as the title.

blends live action and animation to create a surreal hermetic vision that is as beautifully seductive as it is chillingly inaccessible.

The story proves to be elusive, and the robotic performances of the cast make it hard to care about any of the characters -- or to try to figure out what's supposed to be going on.

It's one thing to make an audience sweat a bit to ferret out a plot, or piece together visual clues in order to comprehend a film. But it's quite another to dunk such richly imagined pictures in such a thick coat of shadow.

Beyond that? Not much.

The Quay brothers have created a gloriously gorgeous filmwith wondrous set pieces that have been beautifully shot inburnished tones by cinematographer Nic Knowland. It's a dark and disturbing fairy tale that fans of the brothers' work will embrace.

Audience Reviews for The Piano Tuner of Earthquakes

There are no featured audience reviews yet. Click the link below to see what others say about The Piano Tuner of Earthquakes!

The Piano Tuner of Earthquakes Quotes