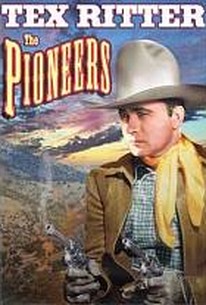 Tex Ritter's thirty-second music Western for producer Edward F. Finney -- the last twenty released by Monogram -- The Pioneers was also Ritter's perhaps most unusual. "Suggested" by James Fenimore Cooper's 1853 The Leatherstocking Tales, the Western featured both Ritter and sidekick Slim Andrews wearing buckskin jackets, the latter even completing his ensemble with a homey coonskin cap. Ritter and Andrews played trail guides saving a wagon train from an Indian attack, much to the dismay of land owner J.W. Carson (Karl Hackett). Carson, along with henchmen Wilson (George Chesebro) and Jingo (Lynton Brent), had orchestrated the raid in the first place in an attempt to scare settlers away from a valuable parcel of land. Tex, meanwhile, is falsely accused of murdering one of the settler's, Ames (Del Lawrence), whose daughter, Suzannah (Wanda McKay), Carson has been courting. Ritter narrowly escapes a lynching party to hook up with his pal Red Foley. Together with Slim and Doye O'Dell (of radio fame), they manage to save Suzannah from a fate worse and death and the settlers in general from Carson's evil machinations. Making their screen debuts, country and western performers Red Foley and Doye O'Dell "played" themselves, a rather odd choice for what was ostensibly a Fenimore Cooper adaptation. Ritter, who had just married his former co-star Dorothy Fay, left Finney in favor of a more steady paycheck from Columbia Pictures. The Pioneers, alas, was the former radio performer's final solo starring vehicle.

Chief Many Treaties
as Warcloud

Red Foley's Saddle Pals
as Themselves
View All

Critic Reviews for The Pioneers

There are no critic reviews yet for The Pioneers. Keep checking Rotten Tomatoes for updates!

There are no featured reviews for The Pioneers at this time.