The Pirates! Band of Misfits2012 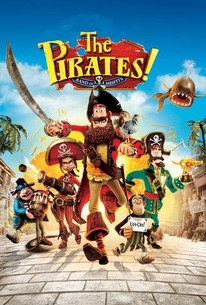 Critics Consensus: It may not quite scale Aardman's customary delirious heights, but The Pirates! still represents some of the smartest, most skillfully animated fare that modern cinema has to offer.

Critics Consensus: It may not quite scale Aardman's customary delirious heights, but The Pirates! still represents some of the smartest, most skillfully animated fare that modern cinema has to offer.

Critic Consensus: It may not quite scale Aardman's customary delirious heights, but The Pirates! still represents some of the smartest, most skillfully animated fare that modern cinema has to offer.

The Pirates! Band of Misfits Videos

The Pirates! Band of Misfits Photos

In The Pirates! Band of Misfits, Hugh Grant stars in his first animated role as the luxuriantly bearded Pirate Captain - a boundlessly enthusiastic, if somewhat less-than-successful, terror of the High Seas. With a rag-tag crew at his side (Martin Freeman, Brendan Gleeson, Russell Tovey, and Ashley Jensen), and seemingly blind to the impossible odds stacked against him, the Captain has one dream: to beat his bitter rivals Black Bellamy (Jeremy Piven) and Cutlass Liz (Salma Hayek) to the much coveted Pirate Of The Year Award. It's a quest that takes our heroes from the shores of exotic Blood Island to the foggy streets of Victorian London. Along the way they battle a diabolical queen (Imelda Staunton) and team up with a haplessly smitten young scientist (David Tennant), but never lose sight of what a pirate loves best: adventure! -- (C) Sony

Hugh Grant
as The Pirate Captain

Brendan Gleeson
as The Pirate with Gout

Martin Freeman
as The Pirate with a Scarf

Brian Blessed
as The Pirate King

Anton Yelchin
as The Albino Pirate

Al Roker
as The Pirate who Likes Sunsets and Kittens

News & Interviews for The Pirates! Band of Misfits

The Animated History of Stop Motion Movies
Best Movies Off the Radar 2012
Critics Consensus: The Pirates! Band of Misfits Is Certified Fresh

View All The Pirates! Band of Misfits News

Critic Reviews for The Pirates! Band of Misfits

It's a fun frolic young and old alike should enjoy equally, filled with sights and sounds so richly rewarding one almost has to see it twice to be able to appreciate them all.

The action is beautifully staged, delightful, and exciting.

Gadzooks, is this movie bonkers. I mean, really.

The wonderful folks at Aardman have created another deliriously silly stop-motion animation delight, filled with giddy pleasures and so many witty details flying by that you wish for a pause button.

The filmmakers have said they are already dreaming up a sequel. They needn't hurry. Whatever treasures these pirates have are well buried.

Frequently funny and layered with humor to suit all ages.

Purists will no doubt be bothered by Aardman's decision to incorporate digital imagery and 3-D, but they use it well here.

The result is a hurrah for the return of Aardman's finest. Easily their most enjoyable film since Wallace & Gromit.

Gideon DeFoe's screenplay is smart and very funny with some very well staged laughs. The direction from Peter Lord and Jeff Newitt is just as smart, full of some laugh out loud sight gags.

I think it's a really fun movie.

The Pirates! Band of Misfits doesn't quite deliver the memorable sea shanty that keeps audiences coming back for another verse.

If nothing else, I can say that Aardman's latest is one of the best-looking movies I've seen in 2012...Oh, and the movie also happens to be very funny, a spoof on Pirate pictures without getting all that much weighed down with pop culture.

Audience Reviews for The Pirates! Band of Misfits

Cute, adventurous, funny and clever -- without being too cute, adventurous, funny or clever. The animation is delightful and the voice acting is well-done (for the most part), with particularly appealing performances by Imelda Staunton (Queen Victoria) and Hugh Grant (The Pirate Captain). It's a fun family film with something to enjoy for everyone.

An amusing but irregular stop-motion animation (with a useless 3D) that has many intelligent and really well-inspired scenes but also moments of pedestrian humor that make the movie look as silly as, say, an episode of The Big Bang Theory.

A rather cute tale of fringe pirates with funny puns, a gruesome twist from Queen Victoria voiced by evil incarnate, Imelda Staunton, and some impressive, near-unrecognizable voicework by Hugh Grant. Nevertheless, the gaping ellipses of claymation mouths makes me a little queasy, so I just wasn't terribly into it.

The Pirates! Band of Misfits Quotes