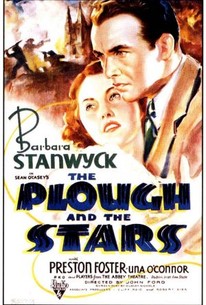 The Plough and the Stars Photos

John Ford, whose fierce pride in his Irish heritage often manifested itself in his work, directed this historical drama which uses as its backdrop the 1916 Easter Rebellion of Irish patriots against British rule. Nora Clitheroe (Barbara Stanwyck) runs a rooming house in Dublin and tries to stay away from the political turmoil raging around her, so she becomes quite upset when she learns that her husband Jack (Preston S. Foster) has joined a militia of Irish rebels trying to drive out the British. Nora fears for Jack's safety and begs him to keep his distance from the revolutionary forces. Jack assures her that he'll step back from their activities, but it's not until it's too late that Nora learns that Jack has done just the opposite -- and has become a commander with the Irish Citizen Army as they plan an ill-fated raid on the Dublin Post Office. John Ford had several bitter disputes with RKO Pictures while making The Plough and the Stars, especially after the studio re-shot several scenes with another director to tone down the film's politics; while he distributed several independent productions through the studio, he never shot another picture for RKO. ~ Mark Deming, Rovi

Denis O'Dea
as The Young Covey

Mary Gordon
as Woman at Barricades

Doris Lloyd
as Woman at Barricades

Mary Quinn
as Woman at the Barricades

Critic Reviews for The Plough and the Stars

Worthy successor to The Informer.

A far finer picture than its box-office rating would indicate.

Audience Reviews for The Plough and the Stars

John Ford, showcasing his pride of his Irish heritage, made this emotional and realistically violent film about the 1916 Easter Rebellion of Irish patriots revolting against their British rulers. The film is captured brilliantly and is filled with loads of destruction and the devastating effects on the Irish people. RKO studios had another Director come in to reshoot the more political tones that Ford wanted, causing him to never make another film with the studio again. If you're a fan of John Ford and Classic films, this is one to give a spin.

The Plough and the Stars Quotes