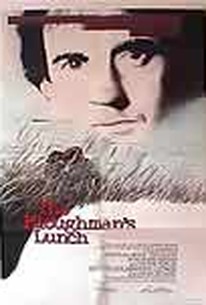 A writer displays a troubling streak of opportunism in his personal and professional lives in this British drama. As the Falkland Islands war rages, journalist and aspiring historical writer James Penfield (Jonathan Pryce) is working on a book that will examine the 1965 Suez crisis in a manner compatible with the current political climate. James is also pursuing Susan Barrington (Charlie Dore), a documentary filmmaker whose mother Ann (Rosemary Harris) is a noted expert on the Suez crisis and an outspoken leftist. While James has assured his publisher that his book will take a conservative view, he tells Susan and Ann that he's a socialist and that his book will reflect that position as he attempts to glean information from them. James also sleeps with Ann as his relationship with Susan hits a rough patch, but he isn't especially forgiving when he discovers that Susan has had a fling with Jeremy Hancock (Tim Curry), a tabloid journalist who has worked with both of them. The Ploughman's Lunch includes a sequence where the characters attend the 1982 Conservative Party conference, which was shot at the actual event (and includes a speech Margaret Thatcher delivered to the assembled Tories). ~ Mark Deming, Rovi

Vivienne Chandler
as Mom in Commercial

David Lyon
as Newsreader
View All

Critic Reviews for The Ploughman's Lunch

Audience Reviews for The Ploughman's Lunch

I love Tim Curry, which is the reason I thought this might be a decent movie, but it's so slow and boring, I couldn't watch the whole thing, and Curry's only got a scene here and there. The story is very political and talky, I didn't find anything interesting since I don't know much of anything about politics. Overall, I did not like this movie.