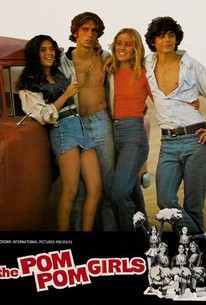 Guys go crazy for the gals cheering on the home team in this raunchy teen comedy from the Seventies. It's football season at Rosedale High, and Johnny (Robert Carradine) and Jesse (Michael Mullins) are eager to lead the school's team to victory. But while Coach Hartmann (Robert Gammon) wants to put the team on the right track, his abusive methods and obnoxious attitude are turning some of the players against him. Meanwhile, the guys on the team are just as interested in making time with the girls on the cheerleading squad as they are in scoring touchdowns, and Johnny starts dating Laurie (Jennifer Ashley), much to the annoyance of her former boyfriend Duane (Bill Adler), a thick-headed tough guy. Meanwhile, the Rosedale High team is gearing up for their annual game with cross town rivals Hardin High by launching a battle of pranks, which reaches its peak when the Rosedale guys steal a fire engine. The Pom-Pom Girls was an early credit for director Joseph Ruben, who later went on to make The Stepfather, True Believer and The Forgotten.

Obvious and determined shortcomings aside, the feature does a fine job itemizing the dilemmas of '76, developing into a beguiling snapshot of the way things once were.

It stars out all over the place and I didn't keep watching to find out if it got better.