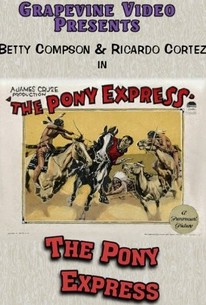 Senator Glen (Al Hart) is a slimy politician who conspires to turn California and Sonora into his own empire in this big-budget western. Jack Weston (Ricardo Cortez) is the gambler who joins the Pony Express and brings news of Abraham Lincoln's election, which results in California joining the Union. Wallace Beery portrays the colorful gambler Rhode Island Red, with Charles Gerson as Sam Clemens and John Fox, Jr. as young Bill Cody. The film is highlighted by the battle scene between the Indians and the cavalry. The feature was made with an intention to rival The Covered Wagon and The Iron Horse as a western epic, but fails to live up to the promise.

Vondell Darr
as Baby
View All

Critic Reviews for The Pony Express

The result is a picture with many stirring scenes of the old West, but with no continuity and none of the superb simplicity that dignified and distinguished The Covered Wagon.

There are no featured reviews for The Pony Express at this time.