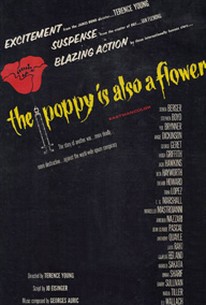 The Poppy Is Also a Flower Photos

This exciting adventure provides an interesting look into the manufacture and trafficking of opium and heroin. The original story was written by Ian Fleming who died shortly before he was to pen the screenplay. The story is set in Iran and opens as an American undercover agent is murdered in the desert while attempting to buy opium. Two more agents are sent to Teheran to investigate the death and stop the powerful drug ring behind the smuggling. Once there, they run into the dead agent's girlfriend, who soon after suddenly disappears. Unfortunately, they cannot find her and so focus on their other job. To figure out where the drugs are going (and hopefully get a lead on the missing girl) they steal a bunch of opium and lace it with radioactive tracers so they can track it with Geiger counters. They then follow the drugs as they are slowly dispersed throughout Europe. After many twists, turns and blind alleys, the agents eventually succeed. This film was originally made for TV and contains cameos from many stars who worked for little pay because they strongly supported its anti-drug message. Those stars include Grace Kelly (who introduces the film) Omar Sharif, E.G. Marshall, Eli Wallach, Marcello Mastrioanni, and many more.

Jean Pascal
as Leader of Tribesmen

Trini Lopez
as Himself

Critic Reviews for The Poppy Is Also a Flower

You haven't lived until you've seen the film's train-bound finale, with a two-fisted E.G. Marshall smacking Harold Sakata while Rita Hayworth carries a yapping poodle as she wobbles around in a druggie haze.

Audience Reviews for The Poppy Is Also a Flower

There are no featured audience reviews yet. Click the link below to see what others say about The Poppy Is Also a Flower!

The Poppy Is Also a Flower Quotes