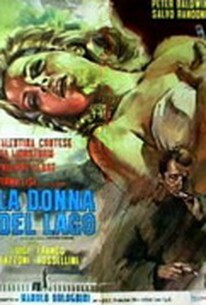 A young writer goes to a summer resort in wintertime to be alone and contemplate his moral dilemma in this thrilling and suspenseful psychological drama. He goes to visit Tilde (Virna Lisi), a young woman with whom he had a brief sexual relationship. To his horror, the writer learns that she has been killed by having her throat slashed, and her body was thrown into the lake. He finds no one willing to talk about the crime, and he uncovers the medical examiner's report that lists the promiscuous victim as being a virgin. When the wife of the hotel-owner is found dead, the writer urges for an in-depth investigation of the unsolved crimes. ~ Dan Pavlides, Rovi

Displayed in crisp black and white, The Possessed is a remarkably beautiful film. The cinematography by Leonida Barboni is often extraordinary, and the unhurried direction from Luigi Bazzoni and Franco Rossellini allows it to shine.

[T]his highly polished mirror of uncertainty and obsession is a lovely discovery under any identity.

There are no featured reviews for The Possessed (La Donna del lago) at this time.