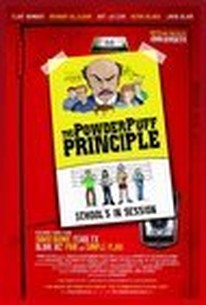 A throwback to the days of classic John Hughes' films like "Ferris Bueller's Day Off" and "The Breakfast Club," "The Powder Puff Principle" is a modern day high school comedy with a retro feel. It tells the story of a vindictive high school principal that lacks principle. When Principal Richard Skelter (Clint Howard) vengefully cuts the school's fine arts program, changes the school's logo, dissolves the student council, and then finally cancels the students' beloved Powder Puff football game at a pep rally out of spite! Someone (???) breaks into the school's gymnasium and paints a gigantic mural on the wall of the Principal dressed up as a cheerleader, bent over, his ass exposed, clutching onto a handful of green cash as he desperately tries to pick up an enormous copper penny. Soon after, a detective named Andy (Richard Gilliland) shows up to investigate the crime. As Andy uncovers the motives behind the prank, EVERYONE at the school becomes a suspect. When the investigation leads to an interrogation of the Principal himself, we go on a roller coaster ride of flashbacks that introduce us to all the usual suspects: the art teacher (Kevin Kilner), the coach (Art LaFleur), and a host of colorful students. Linda Blair (The Exorsist) co-stars as the School Board President adding to the laughs when she tells Principal Richard Skelter: "You're fired, Dick!"

There are no critic reviews yet for The Powder Puff Principle . Keep checking Rotten Tomatoes for updates!

There are no featured reviews for The Powder Puff Principle at this time.