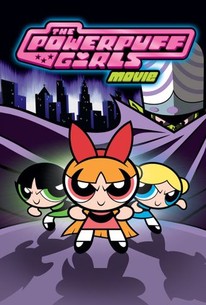 Critics Consensus: It plays like an extended episode, but The Powerpuff Girls Movie is still lots of fun.

Critics Consensus: It plays like an extended episode, but The Powerpuff Girls Movie is still lots of fun.

Critic Consensus: It plays like an extended episode, but The Powerpuff Girls Movie is still lots of fun.

The most adorable little superheroines in all of Townsville make the jump to the big screen in this feature-length animated adventure based on the popular Cartoon Network series The Powerpuff Girls. Brilliant scientist Professor Utonium (voice of Tom Kane) is performing an experiment in his lab when Jojo, a monkey trained to assist the professor, accidentally drops a bottle of hyper-powerful Chemical X into a mixture of sugar, spice, and everything nice. To the professor's surprise, what should emerge from the subsequent chemical reaction but three little girls: bright and practical Blossom (voice of Cathy Cavadini), sweet and sunny Bubbles (voice of Tara Strong), and tomboyish Buttercup (voice of Elizabeth Daily). Professor Utonium discovers that the girls have remarkable powers and super-human strength, and he hopes they'll be able to improve life in the crime-infected City of Townsville. However, after their first day at Pokey Oaks Kindergarten with Ms. Keane (voice of Jennifer Hale), the girls learn that having super powers can be both a blessing and a curse. Rejected by their classmates and quite unhappy, the girls are easily swayed when Mojo Jojo (voice of Roger L. Jackson), a superintelligent monkey in a turban, asks them to help him with a campaign to save the city. What the girls don't know is that Mojo Jojo is actually the monkey who once assisted the Professor; now he's embraced evil and hopes to use the Powerpuff Girls as part of his criminal scheme to wrestle control of Townsville away from the dense but well-meaning Mayor (voice of Tom Kenny). The Powerpuff Girls Movie was directed and co-written by Craig McCracken, who created the original television show as well as writing most of the episodes.

Tom Kenny
as The Mayor

Grey DeLisle
as Linda/Woman at Zoo

This Cartoon Network feature-length animation manages to teach kids some good lessons and amuse the grown-ups without overdosing on pop-culture references.

Utilising the cheapest-looking animation ever to grace a cinema screen, this Cartoon Network spin-off will only appeal to a fraction of pre-teen girls.

Stretched beyond its usual episode length, the Girls' adventure doesn't pack the nifty punch they're famous for.

Almost as much fun for grown-ups as it undoubtedly will be for kids.

The Powerpuff Girls takes place in a similar vein, although its message is a little more rockum sockum, it still it has style and wit to spare, and a message of empowerment for bad little monkeys everywhere.

This would have been much better had it been reduced to a one hour episode on television rather than a stretched feature film.

The animation is refreshingly retro minimalist and saturated with pastels (including the colored vapor trails of the little heroines), and the action is nonstop.

More fun than any cartoon has a right to be.

[It] may be formulaic but never fails to find other ways to entertain.

Funny, light-hearted, with something for all ages.

I loved the show, but this was really stupid. The animation was only a little better than the show. The story was actually pretty good and gave a good backround of their past. I didn't hate this, but it wasn't very good.

A fun introduction to the crazy and sweet superheroines "The Powerpuff Girls"! It includes their origin story. It's great when they trash an entire city with their new powers. Their monkey adversary "Mojo Jojo" and his legion of other bad monkeys is hilarious. It's quite trippy. There's a "Dexter's Laboratory" short to endure before the girls come onscreen.

A rather lovely family film that is more than just an extended episode. I manages to explore the depths of the characters and their motivations. However most importantly it kicks ass and rides up there with some of the better Superhero films of recent years.