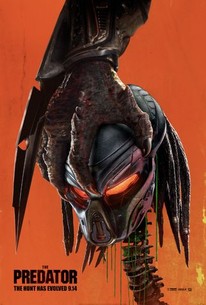 Critics Consensus: The Predator has violence and quips to spare, but its chaotically hollow action adds up to another missed opportunity for a franchise increasingly defined by disappointment.

Critics Consensus: The Predator has violence and quips to spare, but its chaotically hollow action adds up to another missed opportunity for a franchise increasingly defined by disappointment.

Critic Consensus: The Predator has violence and quips to spare, but its chaotically hollow action adds up to another missed opportunity for a franchise increasingly defined by disappointment.

From the outer reaches of space to the small-town streets of suburbia, the hunt comes home in Shane Black's explosive reinvention of the Predator series. Now, the universe's most lethal hunters are stronger, smarter and deadlier than ever before, having genetically upgraded themselves with DNA from other species. When a young boy accidentally triggers their return to Earth, only a ragtag crew of ex-soldiers and a disgruntled science teacher can prevent the end of the human race.

Brian A. Prince
as Predator

News & Interviews for The Predator

View All The Predator News

Critic Reviews for The Predator

This film was a mess, and easily the most disappointing film of the whole year.

Black's latest addition to the franchise cashes in on high-octane action scenes, comedy, self-referential moments and pathological mapping that draws you into the Loonies' psychology, questions of ability and the mission at hand.

Yet another reminder that the strange alchemy of the progenitor probably can't be replicated. Hawkins is spinning in his jungle grave.

In this instance, Black seems intent on catering to as many different types of nostalgia as possible.

How could a movie with so many exciting elements be this boring?

What's remarkable is that the results are so blockbuster-bland. It might've helped if Black had stuck to the band of misfits angle, pitting the Predator against a group of war-ravaged vets who have to find a way past their damage if they're gonna survive.

Kind of fantastic in the way that Sharknado was fantastic.

It's action-packed, fast-paced and, at times, a little silly - everything you want from a great Predator film.

It has a fair share of flaws that keep it from being one of the series' best, but The Predator certainly keeps the hunt interesting.

This is a movie that was torn apart and put back together time and time again during the editing process and it shows.

The pacing, the action, and the humor generally offset the deficiencies in continuity and storytelling.

Mike Massie
Gone With The Twins
View All Critic Reviews (295)

Audience Reviews for The Predator

While some of the plot decisions for the sequel to the alien hunter series are not what I would have chosen at all, they are presented with such a confidence, despite of their silliness. that you can't help but accept them. For the most part. Personally I could have done without the science babble, predator-dogs and gigantic mutants. What really works is the pace, the characters and their chemistry as well as the humor. There is plenty of gore too for those hoping for that. The film is thoroughly entertaining, despite of the plot holes and a few rushed parts. Silly, but enjoyable. Could have been greater, could have been much worse.

A Predator movie that's long on hipster situational quips, but short on that element which made the first so engrossing: a hidden killer killing the best of trained killers that we got at will. Gone is the hunt, lost in a DNA update that jumps a generation or two. "B" movie fun light.

Shane Black helps to trash a franchise he himself had a part when creating it. A shameless, messy and unfunny self parody of an iconic character.