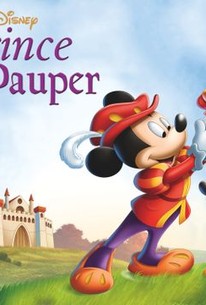 The star of this animated 23-minute version of Mark Twain's The Prince and the Pauper is Mickey Mouse...and Mickey Mouse. The bare bones of Twain's mistaken-identity plotline are adhered to, with several delightful slapstick sidetrips along the way. Supporting Mr. Mouse are such Disney stalwarts as Minnie Mouse, Donald Duck, Goofy, and Black Pete (as the villain, natch.) The film is a delightful hark back to such Disney cartoons of yore as Brave Little Tailor (1938) and Mickey and the Beanstalk (1947), though there are plenty of contemporary references to keep a 1990s audience happy. When originally released to threatres before The Rescuers Down Under, The Prince and the Pauper included a "count-down" clock to bridge the intermission time between the cartoon and the main feature.

Bill Farmer
as Weasel #1
View All

It is, in turns, giddy and lovely -- the kind of film that reminds you absolutely of what childhood is really about.