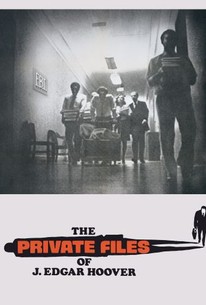 J. Edgar Hoover (1895-1972) was a complex, devious and difficult man who was respected in his lifetime as a paragon of civic responsibility. Beginning in the 1920's, he built the U.S. Federal Bureau of Investigation (FBI) into an organization with wide-ranging powers and effectiveness, which was seemingly above politics. After his death, a number of things were revealed about his life and political dealings which cast a shadow over his reputation for public decency. Even in the late 1970s, when The Private Files of J. Edgar Hoover was made, many of those things were still rumors. Perhaps it was in response to the charge of rumor-mongering that this film received so little critical praise. The much-despised rumors depicted by this movie were later shown to be just the tip of the iceberg of Hoover's secrets. In the story, a decadently homosexual Hoover (Broderick Crawford) built his political power base by getting all the dirt he could on the government's movers and shakers -- particularly their sexual liaisons -- and blackmailing them for their support when he could not get it in any other way. Not only that, he is shown to have taken an unsavory delight in hearing recordings of the sexual congresses of congressmen and the like. The earlier and more heroic aspects of his career are also re-enacted for the screen. Curiously, for so scandalous an enterprise, the film's locations were often the real ones: Hoover's FBI office, the U.S. Attorney General's office, and so on.

Andrew Duggan
as Lyndon B. Johnson

Critic Reviews for The Private Files of J. Edgar Hoover

...a mostly uninvolving and unconvincing drama...

Audience Reviews for The Private Files of J. Edgar Hoover

There are no featured audience reviews yet. Click the link below to see what others say about The Private Files of J. Edgar Hoover!