The Professor and the Madman2019 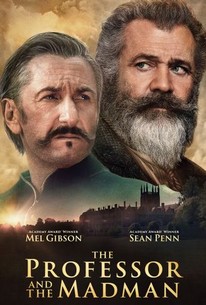 The Professor and the Madman Videos

The Professor and the Madman Photos

Based on the worldwide best-selling novel by Simon Winchester, THE PROFESSOR AND THE MADMAN is an extraordinary true tale of madness, genius, and obsession about two remarkable men who created history with the writing of the Oxford English Dictionary. The compilation of the Oxford English Dictionary began in 1857 and was one of the most ambitious, and revolutionary projects ever undertaken. Professor James Murray (Mel Gibson) took on the challenge of creating the most comprehensive dictionary ever compiled, but knew that it would take him and his team over a century to compile all known definitions. However, by "crowd sourcing" the work, that is, by enlisting definitions from people all over the world, the dictionary could be compiled in mere decades. As definitions were collected, the overseeing committee, led by Professor Murray, discovered that one man, Dr. W.C. Minor (Sean Penn), had submitted more than ten thousand words. When the committee insisted on honoring him, a shocking truth came to light: Dr. Minor, an American Civil War veteran, was a convicted murderer and being held at an asylum for the criminally insane.

Brian Fortune
as Head Board Member

Joe McKinney
as Attendant No.1

Shane Noone
as George Merrett

News & Interviews for The Professor and the Madman

View All The Professor and the Madman News

Critic Reviews for The Professor and the Madman

If only The Professor and the Madman as a whole matched the central performances, but it falls short on a number of levels.

The film is a bombastic dirge verging on the preposterous.

Ironically, for a movie about words, the dialogue only sparks to life on rare occasion.

Simon Winchester's book was a best-seller, but you'd never know why from watching this turgid adaptation, which gives you the gist of these events with all the insight and heft of a B-minus high-school book report.

We'll never know where Shemran's movie truly lost its way, but its current form of saving face by sounding smart will make viewers want to simply move on from it, just like its star and director and have.

Gibson is fine; it's everything else that doesn't work.

Winchester's well-written book evolved into a mess of a movie.

Isn't the unwatchable mess we expected it to be. But it's not quite worth a recommendation either.

The movie tells its modest story effectively enough, even if the inelegant performances of the two leads (particularly Penn and his love of a ranty tantrum) are of much help.

For a film about the silken beauty of language, Gibson and his co-stars wade through clunky, chunky dialogue that solidifies in their throats as if swallowing lead. Safinia may as well have cited his screenplay as a sound reason to bury it

It is still a properly directed drama, obsessed with transmitting the redemptive capacity of the written word in its first stretch. [Full review in Spanish]

Audience Reviews for The Professor and the Madman

There are no featured audience reviews yet. Click the link below to see what others say about The Professor and the Madman!

The Professor and the Madman Quotes