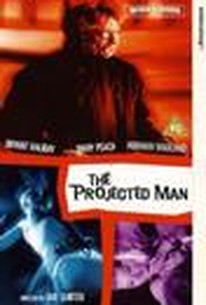 An experiment gone wrong gives new meaning to the saying "you can't get there from here" in this sci-fi drama. Professor Steiner (Bryant Halliday) is a scientist working on a machine that will "project" matter from one place to another; while he's making considerable progress, the device is not yet perfect. Steiner believes that he's close to a breakthrough, but his superior Dr. Blanchard (Norman Wooland) doesn't believe in the project and cuts off Steiner's funding. Not willing to give up on his invention, Steiner learns that visiting researcher Prof. Lembach (Gerard Heinz) might be willing to back him, so with the help of his assistant Shelia (Tracey Crisp), he attempts to "project" himself into Lembach's hotel room with his experimental machine. However, the equipment goes awry, and Steiner emerges as a hideous electrically charged mutant whose touch can kill, sending him on a spree of revenge against those who tried to stop him. The Projected Man was the sole directorial credit for TV writer Ian Curteis. ~ Mark Deming, Rovi

Terry Scully
as Steve
View All

Critic Reviews for The Projected Man

There are no critic reviews yet for The Projected Man. Keep checking Rotten Tomatoes for updates!

Audience Reviews for The Projected Man

There are no featured audience reviews yet. Click the link below to see what others say about The Projected Man!