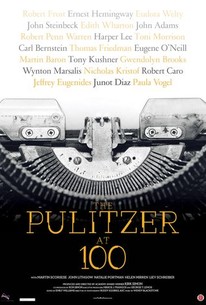 The Pulitzer at 100 Videos

The Pulitzer at 100 Photos

The Pulitzer at 100, by Oscar and Emmy winning director Kirk Simon, is a ninety-minute independent documentary released in conjunction with the Pulitzer Centennial in April 2016. This film is told through the riveting stories of the artists that have won the prestigious prize. With Pulitzer work read by Helen Mirren, Natalie Portman, Liev Schreiber, John Lithgow and Yara Shahidi; journalists include Carl Bernstein, Nick Kristof, Thomas Friedman, and David Remnick; authors include Toni Morrison, Michael Chabon, Junot Díaz, Tony Kushner, and Ayad Akhtar; and musicians Wynton Marsalis, David Crosby, and John Adams also share their stories.

Critic Reviews for The Pulitzer at 100

It's as if filmmaker Kirk Simon entered into the project without a carefully thought-out agenda, instead opting for more of a free-form approach that constantly undercuts its effectiveness.

Far too broad to be deep in any respect, the lightweight documentary benefits from access to plenty of top-shelf interviewees but plays like a back-patting muddle.

Plays as if the Pulitzers were presenting an award to themselves.

It's nice to see everyone, but the analysis never runs too deep ...

Lightweight and self-congratulatory, but with talent like this, at least it is entertaining.

An intellectually satisfying tapestry of what is the literary world's most iconic prize.

But for a film barely one step above a puff piece, The Pulitzer at 100 remains a compelling documentary.

There are no featured reviews for The Pulitzer at 100 at this time.

The Pulitzer at 100 Quotes