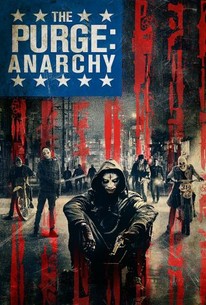 Critics Consensus: Gritty, grisly, and uncommonly ambitious, The Purge: Anarchy represents a slight improvement over its predecessor, but it's still never as smart or resonant as it tries to be.

Critics Consensus: Gritty, grisly, and uncommonly ambitious, The Purge: Anarchy represents a slight improvement over its predecessor, but it's still never as smart or resonant as it tries to be.

Critic Consensus: Gritty, grisly, and uncommonly ambitious, The Purge: Anarchy represents a slight improvement over its predecessor, but it's still never as smart or resonant as it tries to be.

The New Founders of America invite you to celebrate your annual right to Purge. The Purge: Anarchy, the sequel to summer 2013's sleeper hit that opened to No. 1 at the box-office, sees the return of writer/director James DeMonaco to craft the next terrifying chapter of dutiful citizens preparing for their country's yearly 12 hours of anarchy. Returning alongside DeMonaco to produce The Purge: Anarchy are Blumhouse Productions' Jason Blum (Paranormal Activity and Insidious series), alongside Sébastien K. Lemercier (Assault on Precinct 13, Four Lovers) and Platinum Dunes partners Michael Bay (Pain & Gain, Transformers franchise), Brad Fuller (The Amityville Horror, A Nightmare on Elm Street) and Andrew Form (The Texas Chainsaw Massacre, Friday the 13th). www.blumhouse.com/film/thepurgeanarchy (c) Uniersal

Edwin Hodge
as The Stranger

Wiley B. Oscar
as Oscar

Brennan Foenix
as Paramedic
View All

News & Interviews for The Purge: Anarchy

View All The Purge: Anarchy News

Critic Reviews for The Purge: Anarchy

I'm completely on board with the horror action, but this sequel really points out the glaring thematic flaws.

A nasty little B-picture, unashamed of its exploitation roots.

The action sequences are well judged throughout. But we never get any closer to understanding which end of the fence the film-makers sit at.

The Purge films are the kind of lean, clever exploitation pics that you could imagine Roger Corman making in an earlier era.

Flickers of dread materialise - care of those one-percenters co-opting the event for entertainment - though again we're mostly in second gear.

This series combines smarts and shocks in a disarming manner. From small beginnings, it could be a lasting franchise - this entry is a satisfying, hardboiled genre picture.

...it will leave a nasty taste in your mouth, making you wince and jump out of your seat.

The scope has increased, but perhaps too much; three separate stories interact yet still require their own individual outcomes.

A lot of human elements such as fear, anger, revenge and heroism are exploited in ways not many movies of this kind have been able to perfect.

Frank Grillo makes for a grizzled and unsettling presence.

I did enjoy this more than the first, and even more than I thought I would as a whole. By the halfway mark, I actually started caring about the well-being of the main characters in a way I didn't by that point in the first one.

A modern interpretation of those grim, gritty, exploitation style revenge thrillers from the late 1970s and early 1980s.

Audience Reviews for The Purge: Anarchy

Great premise and all, the first "Purge" was essentially a throwaway thriller that never did it's initial hook any justice. That only makes how well made and entertaining "The Purge: Anarchy" is all the more refreshing. It's ambitions for what is essentially a well made, thought provoking, B- movie actioner are more than commendable - it actually succeeds at most of them. Featuring at least a handful of memorable set pieces and a solid antihero in Frank Grillo, "The Purge: Anarchy" is a sequel that dwarfs it's predecessor.

I enjoyed the first "Purge", but this one takes it a step further and really improves on the premise. Here we get to see the Purge in the streets, and how the rich actually Purge. It's very interesting, and in a lot of ways, exactly how this would go down if it were real(which if you ask Brad Oches, he hopes it becomes a reality). The only real complaint I had about this is the lack of deaths and real horror. Just like the first film, this isn't so much a horror movie as it is an action-thriller. That's not necessarily a bad thing, but the premise can really open up for some good horror, that it hasn't tapped into yet. Having said that, I liked it a lot, especially Frank Grillo's character. Definitely worth a watch.

Maybe the key is to set the expectations low here.

With a plot that is more consistent than that of the unsuccessful first movie, even though still insisting on that ridiculous idea of making the Purge look like a cartoonish sect of religious fanatics, this superior sequel also offers now an intriguing Hostel twist to it.