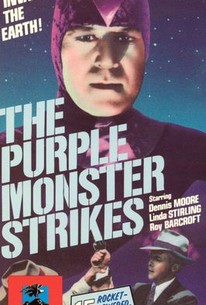 A Martian scientist (Roy Barcroft) lands on Earth near the observatory of Dr. Cyrus Layton (James Craven), the inventor of a spaceship that, once tested and perfected, will be capable of reaching another planet. The visitor reveals that he is the vanguard of an invading army whose arrival has been delayed only by the the Martians' lack of vehicles capable of making the return trip -- a problem that will be solved by the professor's spacecraft. The visitor kills Dr. Layton and reanimates his corpse, taking over his identity in the process. He intends to steal the plans and the vehicle itself, but standing in his way are the scientist's niece Sheila (Linda Stirling), who senses that something is "wrong" with her uncle, and investigator Craig Foster (Douglas Moore), whose job it is to protect the spaceship and anyone having anything to do with it. Across 15 chapters, Craig and Sheila combat the invader's attempts to take control of the ship, all while protecting the man they think is her uncle, and gradually begin to suspect that their mysterious enemy is closer to them than they thought possible.

Roy Barcroft
as The Purple Monster

John Davidson
as Emperor of Mars

Ken Terrell
as Andy
View All

There are no critic reviews yet for The Purple Monster Strikes. Keep checking Rotten Tomatoes for updates!

There are no featured reviews for The Purple Monster Strikes at this time.