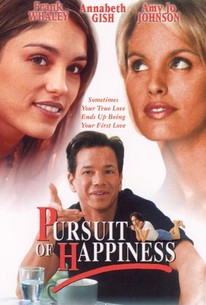 A man with little passion for either his job or his wife gets a wake-up call in this independently produced romantic comedy. Frank Whaley plays Alan, an L.A.-based advertising executive currently being wooed by a tech firm in Seattle. He's about to move himself and his significant other (Dawn Eason) to the rainier climate when, upon returning from the interview, he finds she's left him for another man (Adam Baldwin, at that). Uncertain of anything anymore, Alan tries to find solace in friends and family, turning to his longtime friend Marissa (Annabeth Gish) for support; she in turn is having her own troubles with her husband, Jack (Alex Hyde-White). Hitting the singles bars to find a new love, Alan is slow to realize that the "right girl" may be right in front of him. Actor-turned-director John Putch is the son of actress Jean Stapleton, who appears briefly in Pursuit of Happiness.

Jessica Randle
as Sammi
View All

Critic Reviews for The Pursuit of Happiness

Presented in an endearingly straightforward fashion and features a handful of performances that manage to elevate the familiarity into something capably entertaining.

Audience Reviews for The Pursuit of Happiness

There are no featured audience reviews yet. Click the link below to see what others say about The Pursuit of Happiness!

The Pursuit of Happiness Quotes