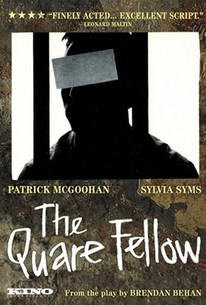 Gallows humor and stark realities of condemned prisoners is the premise for The Quare Fellow. Crimmin (Patrick McGoohan) takes a job as a prison guard. He believes in capital punishment and that everyone in prison certainly deserves to be there. Two men on death row await execution. Crimmin is upset when one of the men hangs himself despite the fact his death sentence was commuted. The other prisoner and Crimmin begin to talk. The guard discovers the man was sentenced to death after finding his wife in bed with his own brother and killing him in a jealous rage. Crimmin discovers the woman he is sleeping with is the prisoner's drunken, sluttish wife. The issues of capital punishment are raised in this story taken from the play by Brendan Behan.

Arthur O'Sullivan
as Himself

Critic Reviews for The Quare Fellow

And not the least of the merits of the movie is the documentary honesty and brilliance of Peter Hennessey''s photography.

The only thing carried over from Behan's play is the bleakness.

Audience Reviews for The Quare Fellow

Finally a movie starring Patrick McGoohan, I don't know why he didn't do more movies, he's a great actor. This movie is a really good drama, dealing with the inner turmoil of a new prison guard, and the wife of the prisoner who is about to be executed. It's really suspenseful, and I recommend it.

In "The Quare Fellow," Thomas Crimmin(Patrick McGoohan) is a newly hired prison guard under the supervision of veteran guard Regan(Walter Macken) who is looking forward to a promotion but is instead being forced out at the end of one last task. That turns out to be a double hanging which turns into a single when the guards learn through the prison grapevine that one of the condemned has been given a reprieve. Now, they are left with the difficult task of telling Kathleen(Sylvia Syms) that it was not her husband. While it certainly has its share of flaws(I don't know how small this town is but what are the odds of Kathleen and Thomas ending up at the same boardinghouse?) and whose punch has probably been diminished with time, "The Quare Fellow" is still a gritty look at prison life in Ireland which serves as a microcosm of the country in general. The former rebels from the time of the Troubles are now in charge while islanders are treated by most as outcasts. Of central concern is the hypocrisy surrounding the death penalty which is connected to the outside population as well.