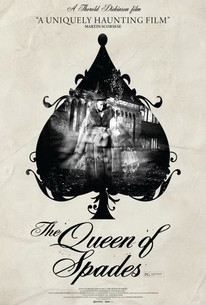 The Queen of Spades Photos

A supernatural tale based on a short story by Russian poet Alexander Pushkin, this is the portrayal of a poor Captain in the Russian army in the nineteenth Century. His comrades in arms play cards nightly, but he cannot afford to join them until one night he dreams that he has gained from a mysterious aging countess her secret for winning at faro--a secret which legend has it she has sold her soul to obtain. This story has been filmed at least a dozen times, but this is by far the best version. Eight of the versions were silent films and another version was done as recently as 1965. A period piece, the settings and costumes are superb.

Brown Derby
as The Countess' footman

Ian Colin
as Officer in the gaming room

Clement McCallin
as Officer in the gaming room

John Howard (II)
as Officer in the gaming room

Aubrey Woods
as Officer in the gaming room

David Paltenghi
as Officer in the gaming room
View All

Critic Reviews for The Queen of Spades

The story develops a morbidly exciting grip thanks to the maniacally superstitious Walbrook and Evans's otherworldly chill -- the funeral scene alone will make you jump.

Opulence of Imperial Russia at the beginning of the 19th century provides a colorful background for this filmization of Alexander Pushkin's short story, which brings to the screen a legend of gambling and intrigue.

It's more distressing to witness just how much the mood of a dark and uncompromising masterpiece can be sabotaged by a producer with his eyes on the easy uplift.

... full of big ideas and grand feelings along with the psychological intrigue and hint of the supernatural that give this film a special edge.

The Queen of Spades, a stylish, polished melodrama based on the Pushkin novella, is [Thorold Dickinson's] most accomplished film.

The Queen of Spades is a treasured relic of a time when the British cinema momentarily abandoned its good manners and revelled gloriously in visual and emotional excess.

Though it does not run as smoothly as other films directed by Thorold Dickinson, it is an outstanding and worthwhile production.

I regret to say I think it is more of a curio than a classic.

Audience Reviews for The Queen of Spades

There are no featured audience reviews yet. Click the link below to see what others say about The Queen of Spades!

The Queen of Spades Quotes