The Queen of Versailles2012 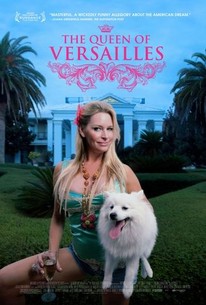 Critics Consensus: The Queen of Versailles is a timely, engaging, and richly drawn portrait of the American Dream improbably composed of equal parts compassion and schadenfreude.

Critics Consensus: The Queen of Versailles is a timely, engaging, and richly drawn portrait of the American Dream improbably composed of equal parts compassion and schadenfreude.

Critic Consensus: The Queen of Versailles is a timely, engaging, and richly drawn portrait of the American Dream improbably composed of equal parts compassion and schadenfreude.

The Queen of Versailles Photos

The Queen of Versailles is a character-driven documentary about a billionaire family and their financial challenges in the wake of the economic crisis. With epic proportions of Shakespearean tragedy, the film follows two unique characters, whose rags-to-riches success stories reveal the innate virtues and flaws of the American Dream. The film begins with the family triumphantly constructing the biggest house in America, a 90,000 sq. ft. palace. Over the next two years, their sprawling empire, fueled by the real estate bubble and cheap money, falters due to the economic crisis. Major changes in lifestyle and character ensue within the cross-cultural household of family members and domestic staff. -- (C) Magnolia

Critic Reviews for The Queen of Versailles

[Jackie's] story can show the ways in which the economic crisis can bring out not only the hierarchical differences that divide us, but the hopes and flaws that unite us.

The Siegels are fascinating because they both are and aren't us, and the film's pleasures are correspondingly-a la reality tv-made up of equal parts jealousy, sympathy, and schadenfreude.

[Siegel] is now suing Greenfield for "misrepresentation". Well, I know whose side I'm on.

Greenfield's film is bathed in Florida sunshine, adding to the sensation that we're watching Lifestyles of the Rich and Famous with a Marxist punchline.

Never has grotesque wealth looked so unenviable, or its removal been so entertaining, as in this garishly watchable riches-to-rags documentary ...

[Siegel] ultimately emerges as someone who belongs more in The Little House on the Prairie: ever cheerful, and triumphantly unimpeachable.

Filmmaker Lauren Greenfield effectively captures an excessive side of the American dream, which includes ventures in Las Vegas.

The Queen of Versailles is one of the best films of the year, nonfiction or otherwise.

Even if you're on a budget, it will be money well spent to see this Must See Festival Film.

The Queen of Versailles is a deliriously enjoyable documentary, a warning about the ridiculous hubris of the American Dream, and how, like the trap of traditions, may very well be a nightmare.

It's this turn of events that transforms The Queen of Versailles into a surprisingly empathetic look at Jackie Siegel as everything around her begins to crumble.

Audience Reviews for The Queen of Versailles

This may be the most fascinating documentary to be made solely about a family since "An American Family." Jackie and David Siegel are some of the most shallow and yet intelligent people in America, being worth billions, both having a good education, and business acumen. They have gaudy taste, a love of McDonald's, and an inability to understand the debt they owe. Jackie spends too much money, plans for a huge home they now can't afford, and suffers under her husband's ill treatment and cranky attitude. The film starts with them doing well in 2008, planning to build the biggest home in America, and ends two years later with bankruptcy, a defaulted mortgage, and a shipwrecked marriage. The documentarians also interviewed their nannies, their children, their relatives, and others affected by the recession's claim on Siegel's billion dollar company. It's both sad to watch them fall from their pedestal, and creepily satisfying to watch them now know loss. The film ends on a sour note as the family unit starts to collapse, and nothing seems to be resolved. This is a must watch for anyone who loves people who are characters in and of themselves.

Sublime. Trash has never been so white!

There are thousands of stories about the impact of the economic crisis going on in the U.S. "Queen of Versailles" is one of those stories, and it happens to be one of the most interesting ones. This is a documentary about David Seigel, a billionaire who runs Westgate resorts, and his family as they build the biggest house in the U.S. At 90,000 sq. ft it is going to be something unbelievable to behold. 30 bathrooms, 17 kitchens, it's going to have it all. Then in the middle, the documentary becomes something else, as real estate bubble causes the Seigels to lose a fortune, lay off 7,000 employees, and risk losing everything. Their house becomes an unfinished dream, while David searches for a way to fix everything. The Seigels aren't bad people, they actually come off very nice, and seem like genuine good people. But, they are spoiled and filthy rich, so seeing them struggle financially is kind of funny, and you don't feel sorry for them at all really, but you like them. This is very entertaining and interesting, one of the better documentaries of the year. Also, it's a movie that will make you say "wtf?" probably more than any other movie of the year.

A perfect marriage of capability and serendipity. Director Lisa Greenfield documents time share magnate David Seigel & his mostly silicone "better" half Jackie as they embark on a journey to treat themselves to the largest home in America. Because, well..., they deserve it. Yet, as fortune would have it, this would all come to a screeching halt with the 2008 financial crisis. Jackie, who can best be described as an infant with a taste for Chinese marble, must essentially learn how to walk again. This may sound dramatic, but there are so many scenes in which Jackie cannot literally fathom a world in which she is not being waited on by the rest of humanity. On top of catching these unfolding events, Greenfield simultaneously probes into the past of these fascinating specimens. Even with the benefit of hindsight and the knowledge that the unbridled pursuit of affluence is a road paved with fractured families, the illusion of wealth vastly outweighs personal responsibility. That Jackie and David agreed to let the cameras keep rolling is a testament to their myopic belief that their tenure as royalty is forever. There is also an interesting theme of junk food that pervades. Maybe this couple just has a love for hitting the drive-thru, but it was a fascinating contrast to see that even amid these gaudy ballrooms and staircases, they cannot stifle the urge to stuff their faces with filth. Trite as it might be, it is hard not to think of that old adage, "you are what you eat." What starts as an episode of the real housewives of Orlando on steroids, evolves into a personal and uniquely American story of aspiration, excess, and the sobering reality of financial security; a microcosm of the financial crisis as a whole.

The Queen of Versailles Quotes