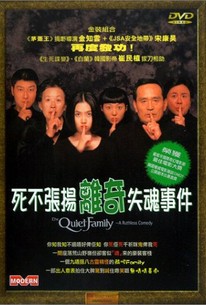 Rejecting current trends in mainstream genres and the conventions of commercial cinema, Choyonnghan-Kajok, an experimental black comedy, follows an eccentric story line with some surprise attacks on the audience. Comedy and horror elements are used intermittently to create a thriller in a family setting. The events are seen through the eyes of seventeen-year-old Mi-na, daughter of the Kang family, who decide to run Mt. Lodge in the suburbs of Seoul after the father is dismissed from his company. Contrary to expectations, there are no guests lining up at the door, and the youngest daughter is upset by a strange noise she hears at night. After two weeks, the first guest appears, but he is found dead the next day. The family buries him in a hurry to avoid bad publicity. Then a couple arrives and commits double suicide and they have to bury them, too. By the time they get used to digging, it's announced a road construction will pass beside their property. The set of the film, Mt. Lodge, was created in real size by a set specialist and architect large enough for camera equipment to move around. Although the subtexts are not labored, the sanctity of family solidarity and the capacity for sudden violence in the very conservative Korean society are some of the themes the audience is left to reflect. Choyonnghan-Kajok was screened as part of the International Forum of Young Cinema at the 49th International Berlin Film Festival, 1999. ~ Gönül Dönmez-Colin, Rovi

Α film almost nonsensical as it unfolds like a collage of episodes rather than a solid story. However, these episodes are quite entertaining as they combine minor violence with black humor, based on the family's mischievous but naive characters

This Hitchcockean farce puts the dead in deadpan.

The Quiet Family, of which many may know Miike's musical remake Happiness Of The Katakuris, focuses on the Kang family and their attempts to run a successful mountain lodge. Individually the family is a strange bunch, but together they are just that...family, bonding when it comes to covering up the untimely deaths of their residents, each family member excelling in their own disposal method. An understatement, in every sense of the word, that makes light of a family's attempts to keep everything together when everything in life seems to be falling apart.

Different from the crazy musical Happiness of the Katakuris remake, this one is actually funny. At first it makes you think it's a scary, bizzare movie until to the piont where it just becomes sick repetitive burying work. Dark comedy to the max. ^0^

This movie is the inspiration for Takashi Miike's fantastic musical black comedy "THe Happiness of the Katakuris" and if you try to even start to compare the two, you'll see that the Katakuris is overall a hell of a lot better than The Quiet Family, but that in no way means that The Quiet Family is bad at all. The plot in the same in both movies, in that a family with an inn has no costumers, then when they start getting costumers they all die. It's a nice little plot going on. It has some relatively funny moments (like when Kang Ho Song's character is in the hospital and he starts laughing histerically) and when a couple stays in the inn and they only pay for an hour or two to have sex and when the girl is riding the guy, the guy's face is just classic, the best moment of the movie. It has good acting from everyone around. I didn't like it as much as The Katakuris, it's still a fine movie in it's own right.