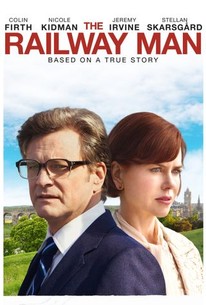 Critics Consensus: Understated to a fault, The Railway Man transcends its occasionally stodgy pacing with a touching, fact-based story and the quiet chemistry of its stars.

Critics Consensus: Understated to a fault, The Railway Man transcends its occasionally stodgy pacing with a touching, fact-based story and the quiet chemistry of its stars.

Critic Consensus: Understated to a fault, The Railway Man transcends its occasionally stodgy pacing with a touching, fact-based story and the quiet chemistry of its stars.

Based on the remarkable bestselling autobiography, THE RAILWAY MAN tells the extraordinary and epic true story of Eric Lomax (Colin Firth), a British Army officer who is tormented as a prisoner of war at a Japanese labor camp during World War II. Decades later, Lomax and his beautiful love interest Patti (Nicole Kidman) discover that the Japanese interpreter responsible for much of his treatment is still alive and set out to confront him, and his haunting past, in this powerful and inspiring tale of heroism, humanity and the redeeming power of love. (c) Weinstein

News & Interviews for The Railway Man

View All The Railway Man News

Critic Reviews for The Railway Man

It's well acted, with a few moments of remarkable intensity, but it's not a journey you'd rush to take.

The Railway Man holds great possibility but wanders off track.

The filmmakers don't have the nerve for a serious consideration of trauma, vengeance, and forgiveness.

The critical problems are an overbusy time-jumping script and reliance on the conventions of the trauma drama - flashbacks, fragmentation, distorted time and space - that prove more a barrier than a window into the character's inner lives.

Beautifully acted, The Railway Man is profoundly moving, and yet, somehow, its sentimental ending manages to be both unearned and predictable.

Why does the movie leave one cold?

The Railway Man packs an emotional punch to move even the coldest heart; so powerful you feel the pain, you feel burdens lift as demons are faced, you feel the forgiveness fill the screen and the room, and just watching you are lifted and uplifted.

Director Teplitzky lacks narrative power behind what should be a traumatic experience. When you see more poignancy in the end credits rather than the actual film, it is a sign to show where the real strength of the story lies.

The Railway Man remains a moving film, with strong performances, but its intentions are perhaps better than its delivery.

It's a very British film which, behind its initially stiff upper lip, connects with deep emotions that make it a quietly moving story of forgiveness and redemption.

Teplikzky has produced a rushed, soulless and utterly unconvincing BBC drama -- and a poor one at that.

The first two thirds of the film seem to be building towards a satisfying resolution, but it gets there only after taking an improbable twist, and that left a sour taste in my mouth.

Audience Reviews for The Railway Man

True story about a prisoner of war who later in life actually befriends the guy who tortured him during the war only lacks that which might've connected us with the focus of the piece, the main character, and thereby involved the audience with the narrative. It means well, but shirks its heavy responsibility throughout.

Got to admit, did not know what this was about when I rented it. Kind of thought it was a romance story. Oops. Needless to say, wasn't too enthralled when the romance between Colin firth and Nicole Kidman suddenly turned into war flashbacks set 40 years prior. Honesty, I was bored crapless for the majority and on the iPad not really paying attention. Bits of it got through. The water torture in particular was harrowing and the reconciliation at the end was surprisingly moving. I would say this is actually a worthy and well made movie, just not one I would have chosen had I actually read the blurb properly! Nicole Kidman's role is relatively small. She's really not a main character.

A very emotional, enjoyable movie with powerful performances from Kidman and Firth!

Languidly paced biography is handsomely mounted and well acted but this period melodrama is inert. Colin Firth exemplifies respectful reverence in his depiction of Eric Lomax as a soft genteel man haunted by the past. His posttraumatic stress disorder continues to weigh on him. That sets the stage for the climax. Lomax learns that that Takashi Nagase is now employed as a tour guide. Actor Hiroyuki Sanada is him as an adult. The Japanese soldier who oversaw his torture in 1942 now works at a museum on the very grounds of the prison camp where the two men first met. In an effort to reconcile his feelings, Lomax re-visits Burma several decades later. On paper the developments sound fascinating, but what is undoubtedly an important account is given a very conventional treatment. The film builds to this meeting as a highlight of sorts. Will he find peace or revenge? Colin Firth's portrait of restrained passivity is both admirable and frustrating. The biopic engages at irregular intervals but it's so carefully modulated that it feels like an artifact from a bygone era. The Railway Man is ultimately a positive tale and I suppose it gets some sympathy points for that. fastfilmreviews.com