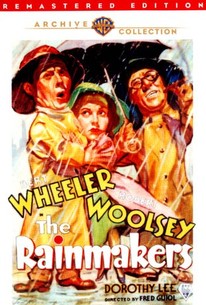 After six box-office smashes in a row, the comedy team of Bert Wheeler and Robert Woolsey came a-cropper with 1935's The Rainmakers. The boys are cast respectively as Billy and Roscoe, professional rainmakers summoned to the drought-stricken farming community of Lima. Everyone in town hopes that Roscoe's magnetic rain-making contraption will bring about a cloudburst -- everyone, that is, except town banker Simon Parker (Berton Churchill), who wants the drought to continue so he can buy up all the land at dirt-cheap prices. When Parker fixes it so that the boys' first public demonstration of their machine will be completely unattended, Billy and Roscoe decide that they need to stage a spectacular publicity stunt to stir up interest. They arrange for a second demonstration to coincide with the planned collision of two dynamite-loaded railroad engines. As the crowd gathers, however, the engineers panic and quit, leaving our heroes to run the engines themselves -- and the result is a tiresome, protracted chase sequence, rendered doubly dull by some of the least-convincing back-projection work in movie history. The traditional duet between Bert Wheeler and his perennial leading lady Dorothy Lee, "Isn't Love the Grandest Thing," is the highlight of The Rainmakers, thanks to a clever gag involving a "tree of truth"; this routine would later find its way into the 1942 Abbott & Costello comedy Pardon My Sarong.

Critic Reviews for The Rainmakers

There are no critic reviews yet for The Rainmakers. Keep checking Rotten Tomatoes for updates!

Audience Reviews for The Rainmakers

There are no featured audience reviews yet. Click the link below to see what others say about The Rainmakers!