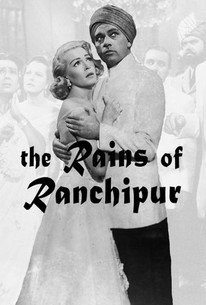 The Rains of Ranchipur Photos

After The Rains Came (1939), this epic romantic melodrama was the second version of author Louis Bromfield's novel to get the deluxe, big-budget treatment from Twentieth Century Fox. Lana Turner stars as Lady Edwina Esketh, the spoiled and hedonistic wife of Lord Esketh (Michael Rennie), a British royal. Intending to purchase some horses, the Eskeths accept an invitation to the Indian city of Ranchipur by the Maharani (Eugene Leontovich). Once there, Edwina meets and unsuccessfully attempts to seduce Dr. Safti (Richard Burton), a handsome Hindu doctor and the Maharani's chosen heir. While in Ranchipur, Edwina also runs into an old acquaintance, Tom Ransome (Fred MacMurray), now the town drunk. As Edwina begins to realize that she's feeling real love for Safti, the doctor succumbs to her charms and a torrid affair begins, as a series of earthquakes and a devastating flood strike Ranchipur. The Rains of Ranchipur (1955) was Oscar nominated for Best Visual Effects. ~ Karl Williams, Rovi

Aly Wassil
as Another Courier

Critic Reviews for The Rains of Ranchipur

This remake, starring Lana Turner, of the 1939 The Rains Came is not as compelling, but the special effects (nominated for Oscar) are good

Audience Reviews for The Rains of Ranchipur

Not as good as the original The Rains Came but an entertaining movie with good special effects.

The Rains of Ranchipur Quotes