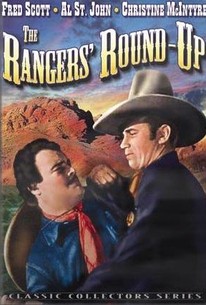 Ranger's Roundup was the second starring vehicle for singing cowboy Fred Scott. The story concerns a travelling medicine show which serves as a safe haven for fugitive outlaws. Scott joins the show to get the facts, discovering that the owner (Earl Hodgins) is oblivious to the presence of bad guys in his midst. The real villain is Karl Hackett, the owner's "trusted" second in command, who is soundly dealt with in the final reel. Ranger's Roundup is significant on three levels: (1) It represents the screen debut of actress-singer Christine McIntyre, best known for her work in the 3 Stooges comedies of the 1940s and 1950s; (2) Veteran funster Al St. John introduces his "Fuzzy Q. Jones" characterization which would serve him so well for the rest of his career; and (3), the film was produced by none other than comedian Stan Laurel, who was then tinkering with idea of leaving Hal Roach Studios and setting up his own production company.

Jimmy Aubrey
as The Drunk

James Sheridan
as Henchman
View All

Critic Reviews for The Rangers' Roundup

There are no critic reviews yet for The Rangers' Roundup. Keep checking Rotten Tomatoes for updates!

There are no featured reviews for The Rangers' Roundup at this time.