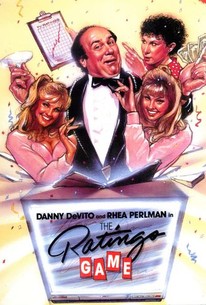 Made for cable television, The Ratings Game was directed by Danny DeVito, who co-starred in the film with his wife Rhea Perlman. DeVito plays the owner of a New Jersey trucking firm who yearns for a televison career. He offers several TV-series ideas to a receptive network programming head. On the verge of being fired, the network exec decides to have his revenge on his ex-bosses by selecting the very worst of DeVito's concepts. The "born to fail" series becomes a hit, and soon DeVito is the hottest programmer in the industry! More truthful than many of us are willing to admit, The Ratings Game premiered with astonishingly little fanfare over The Movie Channel cable service on December 15, 1984.

Jayne Meadows
as Herself (special appearance)

Steve Allen
as Himself (special appearance)

Bruce Kimmel
as W*A*C*ked Out Recruit

Hal Riddle
as The Dean

Lee Ving
as "The Dawn Patrol"

Critic Reviews for The Ratings Game

The razor-sharp script contains countless knowing digs at the TV industry, and the mock shows created for MBC (H.O.T. B.O.D.S. and Levar, the pimp series Nunzio's Girls, etc.) are inspired.

Television has changed so dramatically since 1984 that the film has lost a lot of its direct relevance. There's still fun to be had, it's just that the sting isn't as great as it likely was when it initially aired.

There are no featured reviews for The Ratings Game at this time.