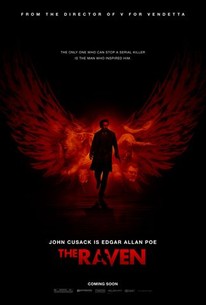 The macabre and lurid tales of Edgar Allan Poe are vividly brought to life - and death - in this stylish, gothic thriller starring John Cusack as the infamous author. When a madman begins committing horrific murders inspired by Poe's darkest works, a young Baltimore detective (Luke Evans) joins forces with Poe in a quest to get inside the killer's mind in order to stop him from making every one of Poe's brutal stories a blood chilling reality. A deadly game of cat and mouse ensues, which escalates when Poe's love (Alice Eve) becomes the next target. Intrepid Pictures' The Raven also stars Brendan Gleeson and Oliver Jackson-Cohen. -- (C) Relativity

Bojan Peric
as Officer at Precinct

Steve Agnew
as Doctor in "Macbeth"

Malina Nikolic
as Gentlewoman in "Macbeth"

Sava Rapic
as Servant
View All

News & Interviews for The Raven

View All The Raven News

Critic Reviews for The Raven

The problem is that "The Raven" is all surface. The movie is nothing but its fun idea, without much development or ingenuity

But on the whole, Ben Livingston and Hannah Shakespeare's never finds solid footing, and although the early murders are inventively intriguing, as the film goes on they slowly but surely lose their power to startle, amaze and perplex.

The maniac on the loose i less Jack the Ripper than a literarily inclined nobody, and not even a butler, to boot.

Basically a well-researched but formulaic mystery centered on one of those nyah-nyah serial killers we've seen a thousand times.

It lingers intolerably on some inessential scenes, rushes through others, and fails to provide any motivation either for Poe's devoted (albeit fictional) love, or the film's archvillain.

The whole thing has the feel of a second-rate living-history exhibit.

Too ludicrous and irrelevant to be offensive.

A gimmicky bit of revisionist history.

Emboldened by an Oscar-worthy performance by John Cusack who, as Poe, is so powerful, so mesmerizing, that there is no trace of Cusack, we see and hear only Poe, The Raven is a masterpiece worthy of the master of macabre himself.

John Cusack as Edgar Allan Poe is immensely watchable, but the story is downgraded to a bog-standard thriller.

There's no reason to see The Raven. It's an unoriginal plot that you've seen a hundred times before. The performances are lackluster and the direction is uninspired.

The Raven, however, is very serious, and the dissonance between its dramatic intentions, its events and its execution generates something of a mess.

Audience Reviews for The Raven

Clunky, and overwrought, in spite of a wonderful cast. The movie didn't really flow all that well, and the premise was short on substance. I usually like John Cusack, but I did not relate to his interpretation of Poe...not at all.

I've seen lots of TV adaptations of this one as a kid. I wasn't disappointed to see the same plot again since years had passed. The story wasn't perfect, but it was executed alright. Adding the Edgar Allen Poe character wasn't effective enough, though. And I reckon that shortening its length by ~20 minutes would have helped. A drag at times, overall it wasn't so painful to sit through. The casting was not a problem for me. In fact, it only made it only made it better. The leading actors did justice to their characters. Check it out for yourself & see how far it disappoints you. 4.5/10

I see what they were going for I just didn't care all that much about the journey. The film was too dark half of the time causing me to strain my eyes just trying to make out what was going on. The characters were all pretty one note. It's a plain jane whodunnit that doesn't do anything original with all the potential it has just by being a period thriller featuring Poe.