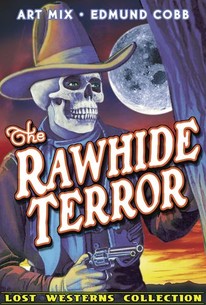 Perhaps the weirdest Western from Poverty Row entrepreneur Victor Adamson, The Rawhide Terror features Art Mix (aka George Kesterson) as Al Blake, a young rancher going up against a phantom killer known only as "The Rawhide Terror." Years earlier, a family of settlers became the victims of a gang of white renegades. Two young boys survived the attack, one escaping safely, the other wandering off into the desert laughing hysterically. Fast forward ten years, and the renegades have become solid citizens in the community of Red Dog. But three of them are killed by the "Terror," whose trademark is a strip of rawhide bearing the legend "Remember ten years ago." Al's father Tom (William Desmond) disappears after confronting a brutal neighbor, Black Brent (William Barrymore), and while searching for him in the desert, Al is captured by the "Terror," who leaves him bound and gagged on a runaway wagon. The hero is rescued in the nick of time by Sheriff Tim Luke (Edmund Cobb) and Tom is found alive and well by Black Brent's young son Jimmy (Tommy Bupp). The "Terror," who has kidnapped Al's sister Betty (Frances Morris), creates an avalanche, but is tracked down by Sheriff Luke and Al. Cornered in his mountain hideout, the mystery killer proves to be the sheriff's long-lost demented brother who has been masquerading as a rancher. The maniac dies happy in the thought that he had avenged the death of his parents.

George Gyton
as townsman
View All

Critic Reviews for The Rawhide Terror

There are no critic reviews yet for The Rawhide Terror. Keep checking Rotten Tomatoes for updates!

There are no featured reviews for The Rawhide Terror at this time.