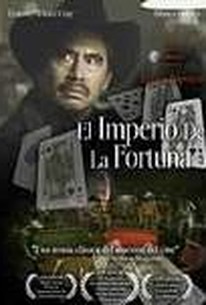 Dull-witted Mexican peasant Ernesto Gomez Cruz comes into possession of a rooster severely injured in a cockfight. He restores the bird's health and wins several bouts, then runs afoul of gambler Alejandro Parodi, who has the rooster's ribs cracked so it can never win again. Taking Cruz under his wing, the gambler teaches the peasant how to be tops in the speculating field. In the company of Parodi's girlfriend Blanca Guerra, who functions as a human good-luck charm, Cruz becomes successful, but Guerra tires of living in Cruz's shadow and kills herself. More than a little influenced by Luis Bunuel, the Mexican Realm of Fortune (El Imperio De La Fortuna) won several awards in its country of origin, though it has only fitfully seen the light of day in the US. ~ Hal Erickson, Rovi

Critic Reviews for The Realm of Fortune

There are no critic reviews yet for The Realm of Fortune. Keep checking Rotten Tomatoes for updates!

There are no featured reviews for The Realm of Fortune at this time.

The Realm of Fortune Quotes