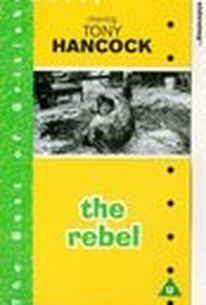 A stodgy clerk decides to end his seemingly eternal ennui, quit his job and head for London to become a Bohemian-type artist in this British comedy. He has not a brushful of talent, but his "work" is embraced by a group of high-brow elitists who wander about flaunting their intellectual affectations. The clerk's success really bites at his flatmate, a talented but still-struggling painter. He finally gets so disgusted that he packs up his clothing and leaves town. His paintings remain in the apartment where they are eventually seen by a rich connoisseur who is so impressed that he sponsors a show. The trouble is, the clerk gets all the credit. He soon basks in his bogus success until his conscience reawakens and he confesses all. In Great Britain, the film is titled Rebel.

Oliver Reed
as Artist in Cafe

Critic Reviews for The Rebel

With his utterly uncomical-looking face and figure, his air of anguished muddle-headed energy. Hancock suggests all sorts of alarming possibilities in everyday life, chasms of frightful surprise directly under our feet if only we knew it.

Tony Hancock, the funniest of the television comedians, has made the dangerous transition to the larger screen rather more happily than most.

There are no featured reviews for The Rebel at this time.