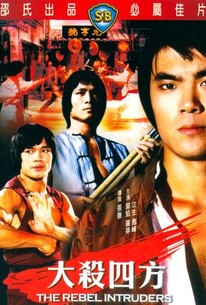 Three top martial arts instructors star in this kung-fu action film set during a period when China was divided up among local warlords. The three heroes, Wang Xui (Philip Chun-fung Kwok, aka Kuo Chui), Yu Hansheng (Chiang Sheng), and Jin Zhengbing (Lo Meng) make a blood pact early on to help each other in their battles against despots. They leave their southern homes for northern China, and their ultimate objective is to eliminate a particularly evil general. There is plenty of spectacular martial arts action using everything from "empty hands" (kung-fu) to hands wielding swords, benches, clubs, chains, spears, and just about anything necessary to win a fight.

Siu-hou Chin
as Spearman
View All

Critic Reviews for The Rebel Intruders

There are no critic reviews yet for The Rebel Intruders. Keep checking Rotten Tomatoes for updates!

There are no featured reviews for The Rebel Intruders at this time.