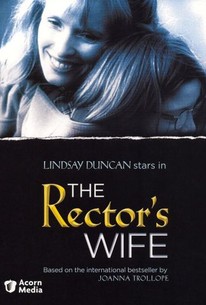 The wife of a kind but uninteresting preacher is scorned by her community for supplementing the family income by taking a job at the local grocery store in this drama starring Lindsay Duncan and based on the book by Joanna Trollope. Anna Bouverie's husband has been passed over for a job promotion, leaving her family financially destitute. Concerned that they will not be able to survive on the humble preacher's meager income, Anna decides to alleviate both the money issue and her personal boredom by accepting a position as a shelf stocker at the local grocery store. Largely mocked by the traditional-minded community for her benign act of independence, Anna soon begins to attract the attention of Cotswald Village's male population. Now, as the men in the small village begin falling in love with the beautiful married woman, Anna finds herself forced to choose between not only two men, but her commitments to her family and her own independence as well.

Critic Reviews for The Rector's Wife

There are no critic reviews yet for The Rector's Wife. Keep checking Rotten Tomatoes for updates!

Audience Reviews for The Rector's Wife

There are no featured audience reviews yet. Click the link below to see what others say about The Rector's Wife!