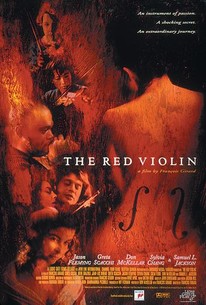 Critics Consensus: A symphony of storytelling whose lulls lead to satisfying crescendos, The Red Violin weaves a centuries-long saga with the journey of a single instrument.

Critics Consensus: A symphony of storytelling whose lulls lead to satisfying crescendos, The Red Violin weaves a centuries-long saga with the journey of a single instrument.

Critic Consensus: A symphony of storytelling whose lulls lead to satisfying crescendos, The Red Violin weaves a centuries-long saga with the journey of a single instrument.

Francois Girard's The Red Violin follows the imaginary history of a unique instrument as it passes over continents and through lives over the span of three centuries. The film was shot in five languages, in five countries, over a period of six months. Beginning in Canada in February 1997, the production moved on to Austria, Italy, England and China before returning to Montreal for post-production.

James Bradford
as Stagehand
View All

The film is heedlessly ambitious. In a time of timid projects and easy formulas, The Red Violin has the kind of sweep and vision that we identify with elegant features from decades ago.

Like the immaculate instrument it follows, "The Red Violin" is a piece of filmmaking fully refined by the hands of someone who believed in the material, and the effect it leaves us with is one of transcendence.

A surprisingly exciting and delicate epic.

François Girard ... with co-writer Don McKellar and an able cast, has spun a yarn that crosses all manner of boundaries: geographic, artistic, and taste.

The story lines, while having little direct connection to historical events, are obviously grounded in musical and artistic legend.

It is disconcerting to see {Jackson}...after watching his exceptional performances as crazy criminals in two Quentin Tarantino movies.

Derided by some contrarian critics for being "safe", this is an ambitious and at times uneven epic that stretches several continents and centuries . . .

A spiritually rich and musically sublime drama about the soulful dimensions of beauty.

a composition in five movements. Although the primary theme (the violin) ties all the segments together, it is but a thin string.

This is the story of a violin that starts in 1681 in Italy and ends in present-day New York. It's hard to judge a film in which the main character is a violin. The characters who could give the film life are the people who own the violin at different places and historical moments, but their transience in the violin's "life" make it difficult to attach ourselves to their plights. And the fortune-teller reading the violin's future is clever for about ten seconds. Also, it's never fully revealed what Charles's motives are; is there any care that he could offer the violin that other suitors can't? The score is quite good, and a project that spans five languages and four countries is admirably ambitious. Overall, the main character being a violin didn't work for me, but I admire the effort.

[img]http://images.rottentomatoes.com/images/user/icons/icon14.gif[/img] Samuel L Jackson is incredibly miscast in The Red Violin in a very unmemorable role in comparison to some of his best. But besides that, this is a fairly effective drama and for me personally, a pleasant surprise. That's not to say it's not flawed in any way. The musical intervels too often interrupt different acts but considering it's audience it does perfectly what it sets out to do. There's also a lot to take pleasure in even if your absolutely clueless when it comes to understanding how a violin works. The geographical locations are beautiful, the period settings are believable, and each member of the huge ensemble cast is engaging and not without interesting and realistic personalities. It is unfortunate that the film itself is never as deep as it wants to be but it's strange how at times it is accidentally brilliant. I cant really remember being dramatically heart broken watching a film in which an inanimate object is thrown onto the floor agressively. I was genuinely surprised at how well the script was written and how good the performances (minus Sam Jackson) were. It isn't one of those cheesy TV period movies by a long shot. Overall though with it's beautiful scenery, it's distinctive characters, and it's soothing if not repetitive score, The Red Violin works impressively as a film. As well as a visual masterpiece to fans of the title instrument.

This is a 2.5-hour episode of "Hoarders" where collectors of stuff turn into Gollum in the presence of this precious creation. I'm not judging - by the end of the movie, I too became Gollum. How many people alive today carry personal tales of the world's people, places and events of the past 300 years? How many other violins have been in a Ménage à trois? How many items born into this world came at such a high cost to its creators? Where's my 2 million dollars? I'm ready to do some antiquing!