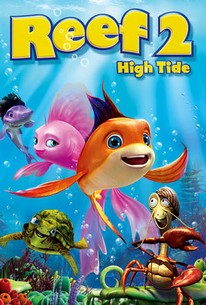 When bullying shark Troy kidnaps Cordelia, Pi and Junior rally their friends for a daring rescue mission in this spirited sequel featuring the voices of Jamie Kennedy, DOnal Logue, Rob Schneider, and Andy Dick. Pi and Cordelia have just become the proud parents of a fresh-faced fry named Junior when Troy returns to the reed in time for high tide. But just as Pi begins training his friends and neighbors for battle, a newcomer named Ronny shows up claiming that his ideas can save everyone from ending up in Troy's belly. Little do the frightened inhabitants of the reef realize, however, that Ronnie was sent by Troy to spy on them, and distract them from defending their homes. Later, when Troy seizes the opportunity to kidnap Cordelia, the fish of the reef unite to save her, and defeat the razor-toothed villain once and for all.

Sequel is less intense than original but still menacing.

While 2006's animated comedy adventure The Reef was pretty forgettable, this sequel is a bit more entertaining.

An improvement on 2006's The Reef, this underwater adventure doesn't hold a candle to big studio animation, but its deeply ridiculous plot is charmingly scruffy.

There are no featured audience reviews yet. Click the link below to see what others say about The Reef 2: High Tide!